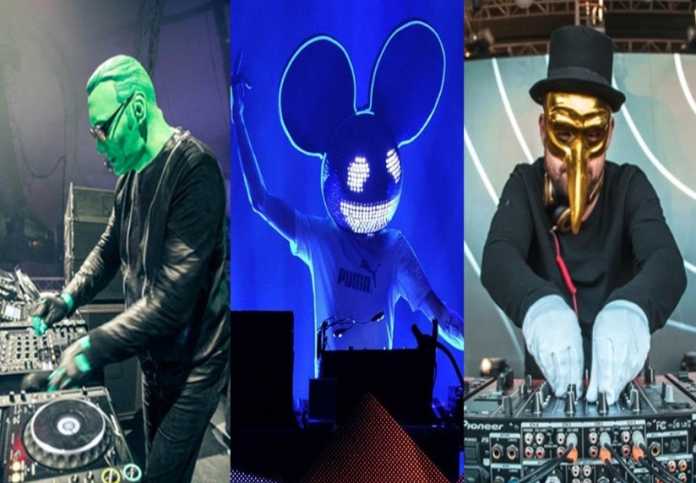 Dj’s with masks are dominating the Electronic Dance Music industry at the moment. Many of them are wearing masks for marketing purposes, some of them for privacy, vanity, or just for fun !

From Deadmau5 and Daft Punk to DJs with still unknown identity, here’s a list of top 15 famous Djs that perform with masks on.

Joel Thomas Zimmerman, known professionally as Deadmau5, is a Canadian progressive house music producer and performer from Toronto, Ontario. Zimmerman produces a variety of styles within the house genre and sometimes other forms of electronic music. Except from playing at music festivals and making new tracks, he’s also known for making jokes and starting Twitter beefs.

Deadmau5 says that years ago, he found a dead mouse inside his computer while changing his video card. When people started referring to him as the “dead mouse guy,” he embraced the nickname, using a numeral to shorten the name because “deadmouse” was too long for the internet chat rooms where he hung out.

Daft Punk are an electronic music duo consisting of French musicians Guy-Manuel de Homem-Christo and Thomas Bangalter. The two achieved significant popularity in the late 1990s as part of the French house movement and were met with continued success in the years following, combining elements of house music with funk, techno, disco, rock, and synthpop.

They are also known for their visual stylization and disguises associated with their music; specifically, the duo have worn ornate helmets and gloves to assume robot personas in most of their public appearances since 2001. They rarely grant interviews or appear on television. 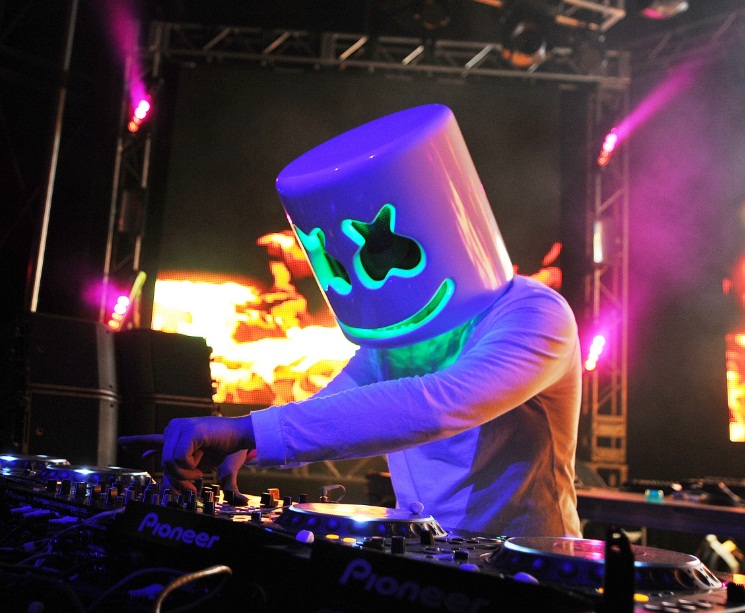 For those who didn`t know, Marshmello is an anonymous new dj and producer putting out great music in the trap and future bass scene. As he wrote in his social network bio “I just want to make good music… that doesn’t require you knowing who I am”, this artist has been pushing a “just enjoy my music, don’t worry about me” mantra since he first appeared.

There’s a rumor that Marshmello is actually Chris Comstock aka Dotcom, but nothing’s officially confirmed yet.

Marshmello can be found playing his brand of trap and future bass at some of the biggest festivals like Ultra Music Festival, Beyond Wonderland and many more.

This mysterious Dj and producer is from Berlin, Germany. His enigmatic, golden strains of deep house have ignited dance floors across the world earning him the coveted producer of the year award at the DJ awards held at Pacha club in Ibiza at the end of the last summer.

Behind that gold pointed-nose facemask to hide his identity, Claptone is one of the most buzzed about artists at the moment, with huge hits like “No eyes”, “Dear Life”, “The music got me”, his Gregory Porter – “Liquid spirit” remix and many more .

He has toured the globe with performances at Tomorrowland, Mysteryland, Creamfields, TomorrowWorld, CRSSD and many other big festivals.

Cazzette is a Swedish electronic music duo, founded in 2011 by musicians Alexander Björklund and Sebastian Furrer. After meeting their manager Ash Pournouri, the three combined two of the favorite strains of dance music, dubstep and house, for a sound they called “dubhouse.”

Bootlegs of Swedish House Mafia and Kanye West tracks introduced their dubhouse to loyal EDM fans, and through Pournouri, they were able to bring this sound to the masses when they made their official debut in 2011 with a remix of Avicii‘s single “Sweet Dreams.”

They were signed by Avicii‘s and Pournouri’s management company, At Night Management, that same year and hired to do an official remix of Swedish House Mafia’s “Save the World.” Released at the same time, their bootleg remix of Adele‘s “Set Fire to the Rain” was nearly as significant, climbing to number one on Hype Machine‘s chart of trending downloads.

They have played at XS and Surrender in Las Vegas, Ushuaia in Ibiza, and Radio City Music Hall in New York City followed, along with main stage slots at festivals like Creamfields, Ultra, and Tomorrowland.(source) 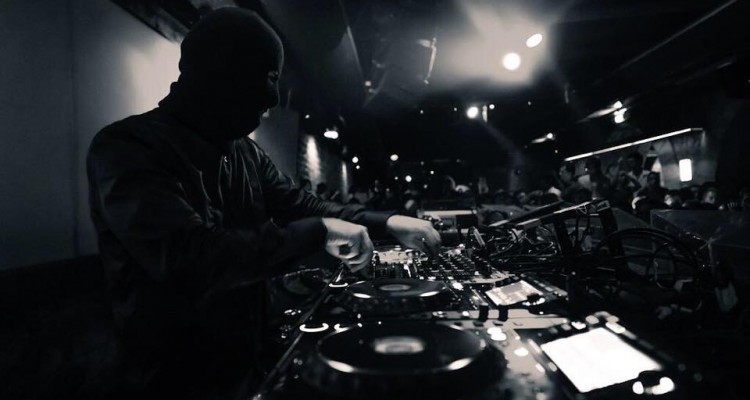 About Malaa, we still don`t know who he is. It’s hard to believe this mysterious masked DJ had his first show ever in July 2015, and only 9 months from then he was chosen to be a part of the esteemed Ultra Miami 2016 live stream lineup.

His ascension into the spotlight is unparalleled, and you can only wonder where the upcoming years will take him. Other accolades from the past year for Malaa include; a spot in the 2016 HolyShip cruise, guest mix on the Diplo and Friends BBC show, and a current tour with the French hitmakers DJ Snake, Tchami, and Mercer.(source)

The 2 Faced Funks, whose identity remains a secret, started wearing pink masks during their DJ sets as joke.

”We had been dj’ing as a duo for quite a while, when we decided to throw a special birthday party for one of us. We bought some cheap, pink masks and advertised with the fact that we managed to book 2 world-famous DJ’s. That night sold out completely, with 1500 people dancing to our set. That was the moment we decided to take the 2 Faced Funks project to the next level. And it works! We’ve had several masks in the meantime, but really wanted to cut loose from the alien-image some people had of us. So we emailed Rogier Samuels (Lord of the Rings, The Hobbit) and he worked on a more friendly-looking, gentlemen type of mask.”

DJs from Mars are an Italian electronic dance music duo known for wearing cardboard boxes on their gigs. In one interview they explained the meaning of their masks

“It was from one of our first videos called “Who Gives a F**k about Deejays”… a boxhead man was the main character of the video concept…when we started doing our first gigs we tried this weird idea, and it worked immediately!!!

Everyone wanted to take pictures with us, everyone wanted to stay in the front of the two boxhead weirdos, it was very different from usual DJ sets when everyone dances like no one’s spinning….so we kept it going on.”

Dr Lektroluv is an electronic music DJ and producer from Gent, Belgium. He’s also known as “The Man With The Green Mask”. When he started as a DJ he was wearing a white doctor`s uniform.

Interesting about Dr Lektroluv, is that on his shows he doesn’t use headphones and instead of this he uses an old telephone to listen to the music he is about to mix.

The Bloody Beetroots’ name is both used as a pseudonym for the solo projects of Sir Bob Cornelius Rifo (production, guitar, keyboards, DJ), as well as his formation with Tommy Tea (sampling)

The duo are well known for the black masks they wear during performances.

Los Angeles’ based DJ Bl3nd is known for wearing his creepy looking mask. At the beginning of his career he used to wear a more chucky (like from the movie) look a like mask.

With a staggering 360 million YouTube views, 1 million YouTube subscribers, and more than 4 million Facebook followers, DJ BL3ND has won legions of superfans (known as BL3NDERS) across the globe with his exuberant viral videos and electrifying live sets.

He’s the record-holder on Billboard’s Uncharted Chart, holding the top spot for 62 weeks and remaining in the charts for a total of 103 weeks; and he was named SoundCloud ‘Artist of the Year.’

Squarepusher is the principal pseudonym adopted by Tom Jenkinson a UK-based recording artist.

His compositions draw on a number of influences including drum and bass, acid house, jazz and electroacoustic music. His recordings are typified by a combination of electronic sound sources, live instrumental playing and digital signal processing.

The mysterious UZ surfaced in 2012 with his amazing Trap Shit series. Immediately gaining attention and praise from tastemakers and top record labels, he dropped records on OWSLA, Mad Decent, Jeffrees, BNR, Mau5trap, and SMOG, all within months of his first releases.

Though the details of his personal identity are unknown, his productions and style have a life of their own. His sounds are minimal, yet powerful, with a menacing intensity, maturity, and restraint.

Michael Kull, better known as Mike Candys is a Swiss EDM Dj and producer. Breaking the mould with a sophisticated production streak behind him, Zurich raised Mike Candys savors in the form of dance, house and electro house flavours.

Winning over enthusiasts from fellow electronic music leaders to those who occupy the clubs weekly, Michael the name behind the talent encases the absolute in musical perfection showcasing just why he’s a double platinum and five gold artist across Europe.

Interesting about Mike, is that he built his mask himself with “a jigsaw and a lot of glue” as he couldn’t find any on the internet.

Danny Masseling, better known by his stage name Angerfist, is a Dutch hardcore producer and DJ. He received the prestigious 46th spot in DJ Mag’s Top 100 DJ edition of 2016. Being the first hardcore artist ever to hit the chart.

Aside from his main alias, he also produces for other genres and subgenres under various aliases and is part of the following groups: The Supreme Team (with Outblast, Tha Playah & Evil Activities), Masters Elite (with Catscan and Outblast) and Roland & Sherman (with Outblast).