The following EDM festivals are our pick of Europe’s best in month of July, offering great music in locations that warrant further exploration, whether that’s in a city, the countryside or by the sea.

Tomorrowland is one of the biggest electronic music festivals held in the world, taking place in Belgium. The festival takes place in the town of Boom, 16 kilometers south of Antwerp, 32 kilometers north of Brussels, and has been organized since 2005.

Following up on last year’s “Kingdom of Melodia,” Tomorrowland announced that the theme of this year’s festival is the equally-baffling-but-fitting “The Elixir of Life.”

“The Elixir of Life” theme is consistent with the festival’s mystical branding and medieval imagery, and seems an adequate description of the role dance music plays in many festivalgoers lives.

Tomorrowland 2016 will kick off July 22-24 in Belgium. Click HERE for the entire lineup and more information.

Here’s just some of what you can expect over the three days.

Alfa Future People is Russia‘s biggest electronic dance music festival. According to its website “is a festival of tomorrow, and tomorrow is all about innovations”. This event is known for hosting some of the world’s leading tech companies and they even give guests a chance to test out their latest gadgets. With all this in mind, it’s only fitting that its main stage looks like it came from the year 2035.

Alfa Future People have an amazing futuristic main stage, superstar DJs line up and live experience that easily rivals established canons like Tomorrowland and Ultra. Their massive line up for this year’s edition has been revealed with performances from Armin Van Buuren, Martin Garrix, Dimitri Vegas & Like Mike, Axwell^Ingrosso, W&W, Pendulum and many more.

Click HERE for the entire lineup, tickets and more information.

The Destination ULTRA experience covers the three islands of Hvar, Brač and Vis and the main ULTRA Europe 3-day festival at the Poljud Stadium in Split.

This year’s line up for ULTRA Europe in Croatia has been revealed with performances from Deadmau5, NERO, Above & Beyond, Afrojack, Alesso, Hardwell, Dj Snake, Hot Since 82, Joseph Capriati and many more. 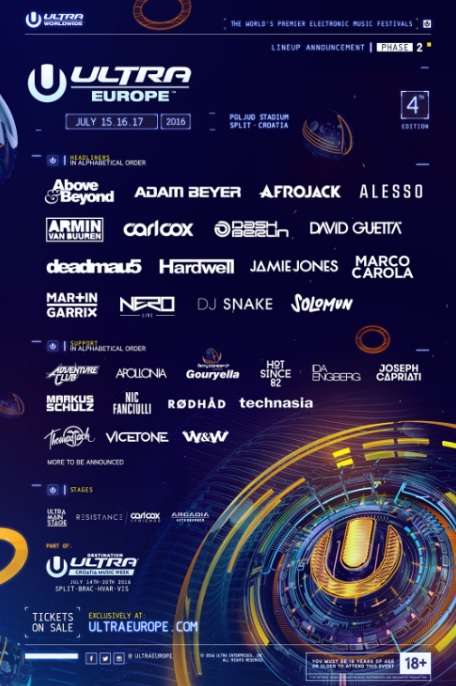 For more information, click HERE. Check out their official recap video below. Enjoy !!!

Four stages of huge names turn the Milton Keynes Bowl into the biggest dancefloor around, as outrageous staging and off-the-scale visual effects set the British rave scene alight one more.

Exit is an award-winning summer music festival which is held at the Petrovaradin Fortress in the city of Novi Sad, Serbia togehter with Jaz Beach in Budva,Montenegro. It was officially proclaimed as the “Best Major European festival‘ at the EU Festival Awards, which were held in Groningen in January 2014, while its sea edition Sea Dance festival won the “Best Mid-Sized European festival” Award in 2015. The EU Festival Award is considered as one of the most prestigious festival awards in the world

Exit takes place at the magical Petrovaradin Fortress, located on the right bank of the river Danube in Novi Sad. The location is unique in the festival world as it is important for the festival’s atmosphere. It’s considered as one of the largest and most beautiful European medivial fortresses. The location also offers superb acoustics, allowing different events, and allows them to take place one next to another at the same time, without any sound interference.

Their line up for this year’s edition has been revealed with performances from Dimitri Vegas & Like Mike, Nicky Romero, The Prodigy, David Guetta, Nina Kravitz, Solomun, Richie Hawtin, Hot Since 82, Maceo Plex, Andy C, Zomboy, Skrillex and many more. 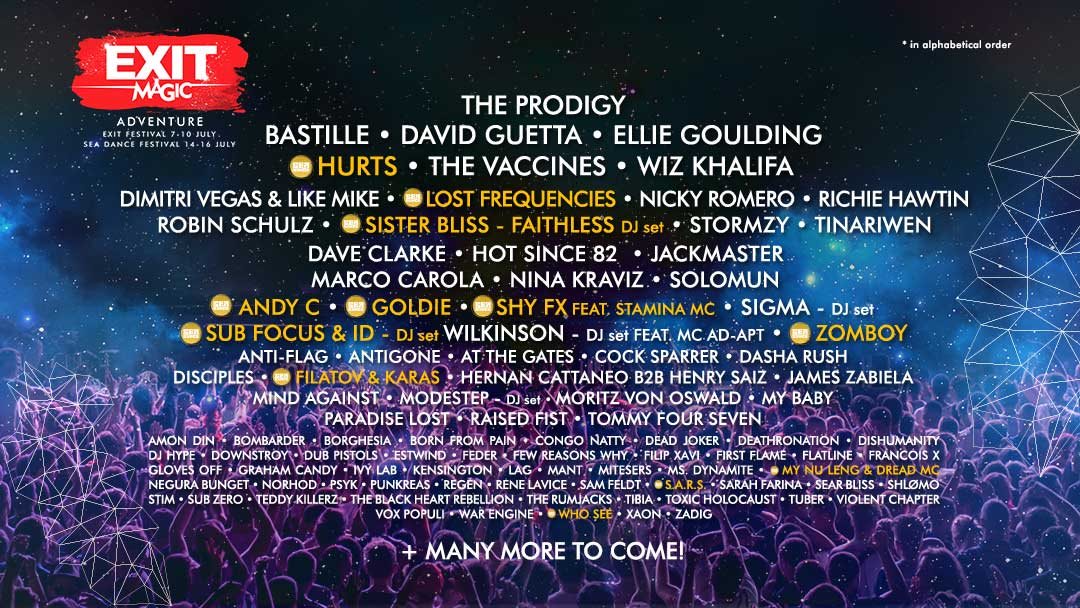 Click HERE for the entire lineup, tickets and more information.