According to the Hungarian newspaper BorsOnline two girls were reportedly found unconscious in EDM duo DVBBS‘ dressing room following their performance at the Balaton Sound music festival in Hungary.

Attendees report that the two girls had been standing in the front row during their set and were invited backstage to hangout with the group. They entered a well protected area backstage, which festival organizers confirmed would not have been possible without artist accompaniment.

Apparently once DVBBS left their dressing room, a festival performer found the girls and immediately called an ambulance. Minutes after hearing what happened, one of the girls mothers called the cops and filed a police report.

A Report from 444 said that 4 men, including the duo, were arrested at Ferihegy Airport in Budapest due to drug related charges. Three of the four men tested positive for a drug test and the fourth was held as a witness. According to the Somogy County Police, the arrest was also made involving the incident about the unconscious girls.

DVBBS responded to the situation by saying:

“We are shocked that some attendees of the Balaton Festival (sic) were victims of events which got them hospitalized. Police asked our cooperation for the investigation and of course we did what we could. Police confirmed there isn’t any link between us and what happened, that’s why we took off a couple of hours later to our next gig in Ibiza. There is another case going on independently from this in connection with marijuana and we gladly answer all questions regarding this and help the police to solve the case. Our thoughts are with the victims and their families. Alex and Chris (DVBBS).” 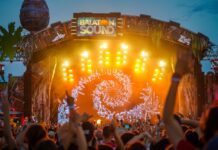 Balaton Sound announces first wave of acts for its 2023 edition