The famed London Fabric nightclub, has been saved. It will reopen its doors after a rescue deal was approved by a judge.

The club came under fire in August this year, following a review sparked by the deaths of 18-year-olds Ryan Browne and Jack Crossley. Fabric was stripped of its licence and faced permanent closure.

However, in a court hearing on Monday, is decided that the Fabric nightclub will be able to trade again after staff agreed to an updated set of conditions under which they must run the venue.

JUST ANNOUNCED: @fabriclondon will reopen. Thanks to all who helped find a solution that protects the club’s future & keeps clubbers safe.

According to a statement put out by Islington Council these terms include people under 19 not being allowed onto the premises during main events, CCTV monitoring, I.D. scanners, and a lifetime ban for anyone caught trying to purchase illegal drugs inside the club.

A statement from the club following their successful appeal thanked supporters telling them “you saved Fabric”.

“We owe everything to our supporters. We really would not be here today without your unparalleled support and generosity. So many different people stepped up to put their voices to our cause, artists from all corners of the music community, fellow promoters who have put on huge events from us and clubbers from around the world who all united behind us. 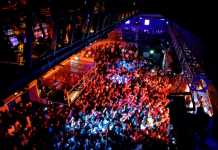