The fully-immersive design that fans have flocked to for the last two years will make its way back for a third and final year in June. Its seven robot-like X figures measure 60-feet tall, spewing massive flames and displaying over 600 lighting fixtures.

Take a look back at the monstrous energy that will again captivate thousands of head-banging Headliners in the bassPOD stage preview below.

Bassrush has evolved from a small niche of like-minded people to a phenomenon redefining bass culture around the world. Since its inception in 2002, Bassrush has produced sold-out North American tours, built a successful record label releasing the genre’s most pivotal tracks, and hosted stages at prominent festivals like EDC Las Vegas, EDC Orlando, and Beyond Wonderland. 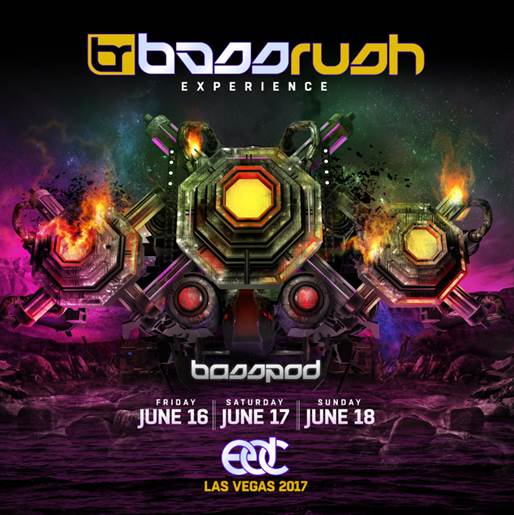 The origins of dance music are deeply rooted within the drum and bass sound, which Bassrush continues to reinvent and grow in new markets. The bassPOD stage has showcased legendary masters of the genre as well as fresh faces setting the standard for what’s to come, including Matrix & Futurebound, Datsik, 12th Planet, Andy C, Excision, Pendulum, Caspa and Rusko.

The audiovisual adventure of EDC Las Vegas returns from Friday, June 16 to Sunday, June 18, 2017 at Las Vegas Motor Speedway. For three days from dusk till dawn, all are welcome as Insomniac presents a breathtaking spectacle in the desert full of iconic Art Cars, exhilarating carnival rides, the world’s most notable names in dance music, and a positive community of beautiful individuals.

Tickets are available, here. For the most updated details regarding EDC Las Vegas, visit LasVegas.ElectricDaisyCarnival.com.