A very rare and random rant hit the internet today when Bassnectar decided to blow up Twitter.

A very rare and random rant hit the internet today when ‘Bassnectar’ decided to blow up twitter.

Because I am not tuned in to haters, trolls, or click bait. I will not tune in 🙂

I tune in to those who I love and trust, who are kind, thoughtful, intelligent, sensitive, and those who have earned credibility. ❤️

That’s Cyberbullying 101: simply don’t tune in to haters, trolls, and ignorant whining bickering fools who waste their time. Tune in to ❤️

Now, although no one really know’s what started all of this, it’s rumored that some Pretty Lights fans misinterpreted something Bassnectar said about a ‘River Beats’ blog. Just another drama filled rumor based upon some random opinion, but on the other hand these two tweets seem to be intertwined.

community is not something you “debut” its something that builds over time, from the heart. https://t.co/YVO9pFY68r

This seems to be the tweet that got the pot stirring, with both Pretty Lights fans and Bassnectar fans chiming in.

So disrespectful. Hes been building on this for a while, im pretty sure hes just letting us know he plans to water it and let it grow

he is absolutely not disrespecting PL. the article is discrediting years of hardwork by using the word “debut”. Sheesh

The whole thing is strange because Bassnectar is known for staying out of the limelight and avoiding interviews. Then on top of that he actually called out ‘Whooks’ who we all know make up a lot of his fan base.

Over the last couple months seems like he’s done more interviews and has been involved in more twitter rants than he ever has over his career. What’s up with Bassnectar ?? 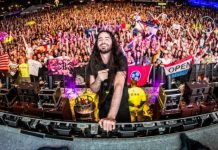