When it comes to drums, KJ Sawka is unstoppable. His music is truly similar to that of a beast– raw, hungry, and ready to rip through your ears with hit after hit of gnarly bass.

This former Pendulum member and current Destroid drummer has been crushing the scene these days, having collaborated on remixes with the likes of dubstep legends such as Excision and even launching his own label, Impossible Records with his wife, Cori.

His first solo EP, titled “Unity of Purpose” was also released earlier this year. This five track project is filled with enough head banging drops and melodic breakdowns to leave any listener craving more, with singles such as “Face Crack” and “Monster” being prime examples of this producer’s bold, versatile talent.

As part of celebrating this release, KJ Sawka has also been on tour, bringing his incredible live drum performances to cities and festivals across the U.S. Phase three of this tour is still ongoing, and fans in the following locations will not want to miss out on the chance to see KJ in person.

Tickets and more information regarding the tour dates can be found here. 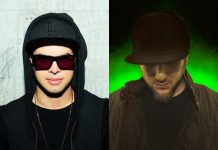