Multiple Grammy Award winning DJ and producer David Guetta has released his long awaited new studio album titled ‘7’ today. Guetta knows exactly where to take his craft and music, introducing a groundbreaking new album for this dance music pioneer. With a total of 27 tracks, the double album represents the many different sides of his musical journey.

‘7’ has been in the making for over two years and it was written, recorded and produced in Guetta‘s studios in Los Angeles, London and Ibiza. Featuring huge electronic pop albums, the album also has a second disc of underground dance tracks, recorded under David Guetta‘s Jack Back alias.

Guetta has a rare vision and innate ability to effortlessly bridge the gap between the two worlds of electronic and urban music which has already seen him produce some of the hottest collaborations on the planet, and this album is no different.

Next to the superstar collaborations, the album also features lots of new talent including Faouzia, Saweetie and Ava Max. 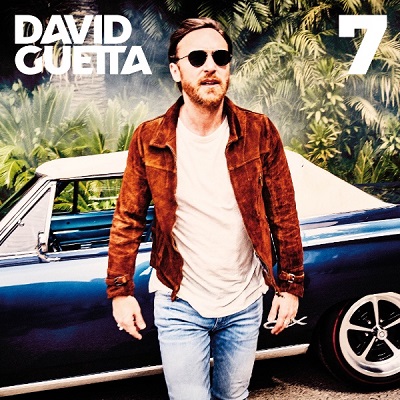 Speaking about the album David Guetta said the following:

”’The album is called 7 because it’s my seventh album which is crazy when I think about it, because that’s a lot of music. 7 is a magical number and represents a full cycle to me. When you’re just starting out as an artist you go step by step and it’s only positive energy; passion, love, challenges.

And then the second phase if you’re successful is when you’re at the top and the energy changes to fear, because when you’re at the top you can not go up any more. And now I feel like I’ve reached a third phase where I just want to put a lot of music out that I love. This is why ‘7’ is a perfect name to me, because I feel like I’m going back to my original energy which can be heard in this album.”

‘7’ includes some of his recent monster hits; 2U with Justin Bieber, Flames with Sia, Like I Do with Martin Garrix and Brooks, Don’t Leave Me Alone with Anne-Marie and Goodbye with Jason Derulo, Nicki Minaj and Willy William.

Recently revealing his Jack Back alias, the album includes a second component solely existing of tracks produced as Jack Back with which Guetta was looking to get the best out of himself and his beginnings.

Guetta: ”Since the album represents a full cycle to me I wanted to go back to the beginning of the cycle, where I’m coming from. These are actually the type of records that come more naturally to me than pop, because I’ve done this all my life. I wanted to create something very personal. I get excited by music that is part of a culture and that’s why I wanted to make this. There is no commercial approach to it, I’m doing it for the love of music.”

After more than three decades working as a dance music pioneer, it is safe to say that at this stage in his career, David knows exactly where to take it next. He’s proven to command the boundless energy required to keep up an extensive gig schedule and maintain a steady stream of releases at the same time.

He is one of dance music’s greatest superstars, an international icon with global sales now in excess of 50 million albums and singles as well as over 10 billion plays across several digital service providers. His extraordinary catalog includes countless #1 singles, multiple gold and platinum certifications, two GRAMMY® Awards, and the biggest social media numbers of any DJ/producer in history.

With a game changing album that touches on many different genres, from dance, urban, melodic songs to reggeaton, latin, Edmund/trap, electrohouse and tech house, David Guetta proves again that he is unique, finally concluding: ‘‘I’m happy and in a good place, and in love with the number one important thing: making music to make people happy.”

“I always wanted to do a song with David Guetta when I was young and now It’s actually real! He’s so talented and an amazing person. His energy is next to none. Love you David!!!”
–Anne-Marie

“What a unique and cool experience, to try something a bit out of my comfort zone and to make something magical! I can’t wait for you all to hear this one…music always wins.”
–Black Coffee

“I’m so excited that I was able to work with David Guetta…!”
–Madison Beer

“Working with [David Guetta] has been such a pleasure and something I couldn’t have planned. Thank you for the fun and sharing your talent! I’m excited for what’s to come.”
–Jess Glynne

“…Really honored to be invited by David to be part of his new project. He’s a producer I’ve always admired…. David literally worked his magic and took the production to a whole new level. He forced me to step out of my comfort zone and that’s what creative collaboration is all about.”
–Saweetie

“Being a featured artist on David’s new album is a really big deal. Not only is he a fellow French like me, but he is one of the most respected producers in the world…”
–Willy William