The news that two of the biggest forces in electronic music, Tomorrowland and Creamfields, are to team up for a massive Steel Yard show on Liverpool’s historic waterfront was game changing in itself. Add to that the fact the event would take the form of one of Dimitri Vegas & Like Mike’s ‘Garden of Madness’ shows and it seemed safe to say that the biggest show of the winter was done and dusted.

Now though, an array of special guests has dropped, as some of the biggest names on the scene are set to join Dimitri Vegas and Like Mike in Liverpool on Saturday 8th December.

First up is Dutch trailblazer Oliver Heldens, a vanguard of the new generation of house music stars with an arsenal of #1 hits and over a billion cumulative streams to his name.

Joining him is a trio who delivered one of this year’s stand out performances at Creamfields, British soulful house trio Disciples, championed by the likes of Calvin Harris and Pete Tong, their deep-groove led productions have garnered them a global fanbase that continues to grow.

Also on the bill is Dutch house duo Sunnery James & Ryan Marciano, together their vibrant onstage energy is infectious and saddled with a sound that merges house, techno, Latin and tribal percussion – the perfect ingredients for their Steel Yard debut. 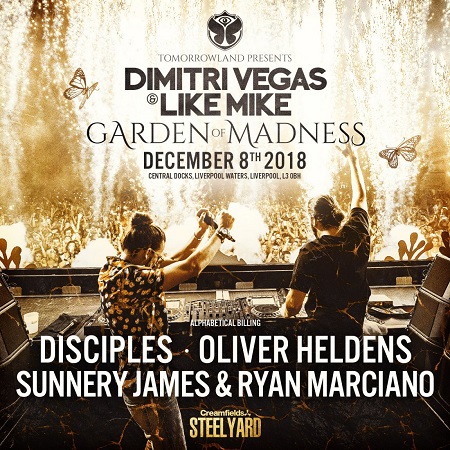 With a line-up that is packed full of energy, variety, and musical prowess, combined with the might of Tomorrowland and Creamfields for an all dance fest, and topped off with some seriously mind-blowing production value, the inaugural ‘Garden of Madness’ show in the 15,000 capacity Steel Yard superstructure looks more than set to be a show to remember.