Rounding off the year in style, popular producer & DJ Black Coffee has unveiled the release of his beautifully melodic new single, ‘Wish You Were Here.‘

With ‘Wish You Were Here’ displaying Coffee‘s artistic diversity – representing a more stripped-back and downtempo offering to his usual blend of irresistibly rhythmic house sound – the track follows a global run of tour dates for the South African, who has performed at Coachella, Tomorrowland, and New York’s Terminal 5 venue throughout 2018.

He also had his second residency at Balearic super-club Hï Ibiza this summer and has rapidly established himself as of the biggest stars of the global electronic music scene, reaching double platinum selling status with his multi-award winning album ‘Pieces Of Me’, in addition to working with the likes of Drake, Jorja Smith, and Alicia Keys. 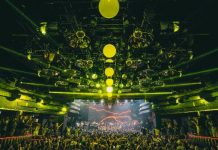