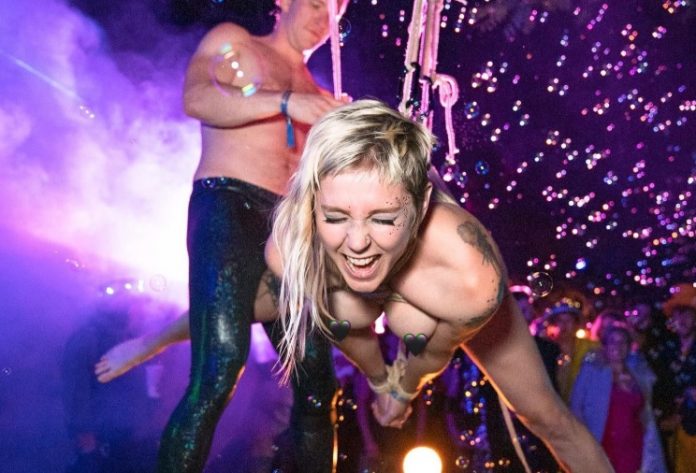 While music festivals are built around the basic principals of freedom, some people take a conservative approach and others take the opportunity to let their freak flag fly unleashed.

Live artist performer, Snatch Adams, has been taking things to the next level during festivals and it seems as if each year she keeps getting bolder with celebrating her “freedom”.

Last year at a festival she laid in a coffin for two-and-a-half hours while 45,000 mealworms ate her skin. This year she wanted to take an interactive approach with the crowd, so while tied up shibari-style on a small platform near the mainstage at an unnamed festival, Adams had a glass bong placed in her butthole, and one by one members of the crowd came to take hits from her butt bong.

The show went on for an extended amount of time. Adams said that one gentleman told her that he had not smoked marijuana for twenty years, but that he knew he needed to do it out of her butt no matter what.

According to a social media post by Adams, “We were about to put a second plug in my pu**y and invite people over to smoke DMT out of it, but we got shut down for being a rogue project that was….controversial to say the least. But in a short time, the response was overwhelming.”

This is the kind of thing where people do not believe it to be true without some sort of photo or video documentation, however, Adams has photo proof and a short write up about her mini event inside of the festival on her Instagram account, snatch.adams. See the full post below.

#buttbong. Last year at my favorite festival, @rachellark and I schemed up an art project for which I lay in a coffin for 2.5 hours while mealworms ate my skin. This year, people kept asking me how I was going to one-up it. I wasn’t going to try! Well, within two hours of arriving last weekend, @jeffweiz ran into me and Rachel and asked, “Hey Snatch, how do you feel about people smoking weed out of your butthole?” Rachel and I looked at each other and smiled. I said, “I feel great about that. Tell us more.” Weiz and his brother had made two prototype hand-blown glass butt bongs, with a reservoir of water that goes inside the body, and no one had ever tested them out before. He thought I was the perfect person to ask. I gotta say, he was right. The idea quickly developed into a spectacle. At 2am I got onto a small platform next to the main stage, naked. @cryptation, who happened to bring all his Shibari gear with him, made a very sexy show of tying me up and suspending me. Ass up, head down, legs spread. The crowd would have been happy with that as a performance, but once I was up, Alexis came up and put the plug in. The crowd didn’t know what was happening…until he filled it with weed and took a hit. A cheer erupted as we invited everyone at the festival to smoke weed out of my butt. Second pic is of Rachel showing us how it’s done! I’m not sure how many people took part, but we had it up and running for about an hour. We were about to put the second plug in my pussy and invite people to smoke DMT out of it but we got shut down for being a rogue project that was…controversial, to say the least. But in that short time, the response was overwhelming. One guy told me the next day that he hadn’t smoked weed for 20 years, but knew he needed to do it out of my butt no matter what. My favorite review of it was “It raised the rating of the festival by an entire star.” Yes, my butt got burned by the lighter a bunch. Yes, I’ll probably be forever known as the “mealworm butt bong girl.” Was it worth it? HELL YEAH!! That was one of the craziest experiences of my life. If you were there to witness it, I’m so so glad. Until next time. 📷 @mr_nightshade more to come!