Fresh from celebrating their 5th birthday earlier this year, Monticule Festival returns in 2020 for another unmissable edition. Set against the backdrop of the picturesque French countryside, the festival welcomes guests to savour its stunning surroundings, diverse musical programme and further activities taking place in and around the site.

As is tradition, Monticule Festival locks in another remarkable and diverse roster of global electronic music names to provide its gripping soundtrack. Making an eagerly-anticipated Monticule debut, Optimo bring their ‘anything goes’ philosophy to the dancefloor, while the deep-digging Roman Flügel serves up his newest discoveries plus some old favourites to open the Main Stage alongside vinson & Shimé, the team behind Naiv Studios that meticulously construct the stage year after year.

Having played every edition of the festival since its inception, the five year anniversary of Malka Tuti will rightfully be celebrated at Monticule, as label bosses Asaf Samuel & Katzele treat festival-goers to a 17 hour showcase that starts at the pool and progresses to the Main Stage. With the likes of Optimo, Fantastic Twins, Full Circle aka Joakim & Alexis-Le Tan, Khidja, Shari Vari and more playing across the mammoth run, it’s set to be a unique and genre-spanning journey for lucky attendees.

803 Crystal boss Cinthie makes her festival debut, as well as regulars of Monticule Racing Team such as Flo Scheuer, Yannic Bartel, Veli x Viwo, Max Vincent Raw and Fez. Having collaborated with Monticule since the beginning, Ilian Tape are back once again and well represented by Andrea and label bosses Zenker Brothers. Life from Earth member DJ Gigola unleashes her high-tempo selections for fans of broken beats.

Munich tastemakers Radio 80k host the listening and hang-out space The Radio 80000 Outdoor Studio throughout the day, streaming artists live from the festival and offering a welcome change of pace. Full Circle aka Joakim (of Tigersushi) & Alexis Le-Tan will also be making the pilgrimage to deliver their unique strand of slowed down proto-trance on the main stage. Many more names to be announced across Monticule’s 5 varied stages shortly.

In addition to the engrossing musical programme, Monticule offers a selection of activities away from the dancefloor too. Via a brief stroll or donkey shuttle, festival-goers can take a soothing dip in a nearby swimming hole or under an idyllic waterfall, take part in painting workshops, yoga and astronomy lessons, or tackle a skateboard mini ramp.

Only 1h30 drive from Toulouse, festival-goers can also sample the famed cuisine and wine of the area at their leisure, with local producers and food trucks serving up the tastiest grub throughout the 5 day stay.

Watch the official 2019 aftermovie below! 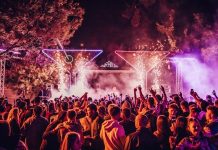