Insomniac announced the next chapter of Beyond Wonderland SoCal, returning to the NOS Events Center in San Bernardino, CA on Friday, March 20 and Saturday, March 21.

During the two-day adventure through Wonderland, Headliners will enjoy the royal treatment and revel in the Queen’s majesty while more than 70 of the world’s most iconic dance music artists kick off a wondrous musical journey, complete with a curious cast of theatrical performers and out-of-this-world decor New for 2020, the next chapter of Beyond Wonderland welcomes a fifth stage to its experience, alongside Queen’s Domain, Mad Hatter’s Castle, Cheshire Woods, and Caterpillar’s Garden.

Showcasing sounds beyond compare, these five stages will feature the best in house, techno, bass, hardstyle, trance and more. Audiotistic, Basscon, Bassrush, Dreamstate, Factory 93, Insomniac Records, and for the first time ever at an Insomniac festival, Diplo’s Higher Ground, will curate epic takeovers across each stage.

Tiësto, Dillon Francis, Kayzo, Diplo, Alison Wonderland, Jack Beats, and Nitti Gritti are just some of the chart-topping and up-and-coming artists set to play the 10th annual Beyond Wonderland SoCal. 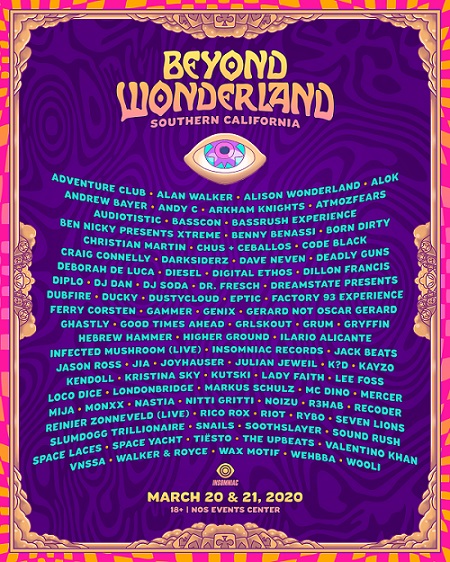