Since 2013, MATTE – the creative company behind BLACK – has consistently brought mystery to each execution, confounding expectations about how people see art and live music today. A concept-driven experience that has featured boundary-pushing musicians and visual artists including Virgil Abloh, Gesaffelstein, Little Dragon, Jesper Just, Marie Davidson, and Tavares Strachan, BLACK symphonizes space & sound by melding gallery-quality installations with the energy of an underground rave.

House and techno meet experimental in MATTE’s thoughtfully curated ecosystem where everyone from all ends of the dance & art spectrum come together for one culturally prismatic night. This year, BLACK’s deconstructed world will embrace the rawness of its production, while still bringing a multi-sensory unpredictability to the lineup with visual artists being announced in the following weeks.

Peggy Gou’s infectious music is an approachable hybrid of sounds, which complements BLACK’s ability to reinterpret deeply entrenched forms. As Gou gears up to record her debut album this year and reduce gigs in the process, BLACK is poised to forge a different domain for the artist to play with fans’ perspectives.

Tickets for BLACK are on sale today, February 4, at black-nyc.com. 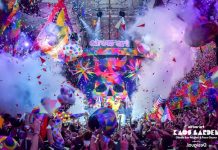