New single from FAMOUZ-signing ESKEI83! As a follow-up to his rave hymn “What U R”, which was released in mid-February, this super-talented DJ and producer now presents a brand new single – “Walk Away”, a fantastic mix of Future-Bass and Modern Pop.

Nashville-born singer and songwriter H. Kenneth contributed the vocals for this amazing track. ESKEI83 is currently the most sought-after Future-Bass and Trap artist in Germany. The worldwide-booked DJ is also the only German Red Bull DJ World Champion to date.

His biggest success so far dates back to 2017: his track “Rave” with Drunken Masters became an absolute club and festival hit and was the most played track on Radio Fritz in 2017. 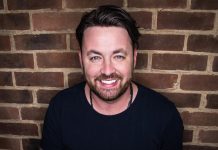