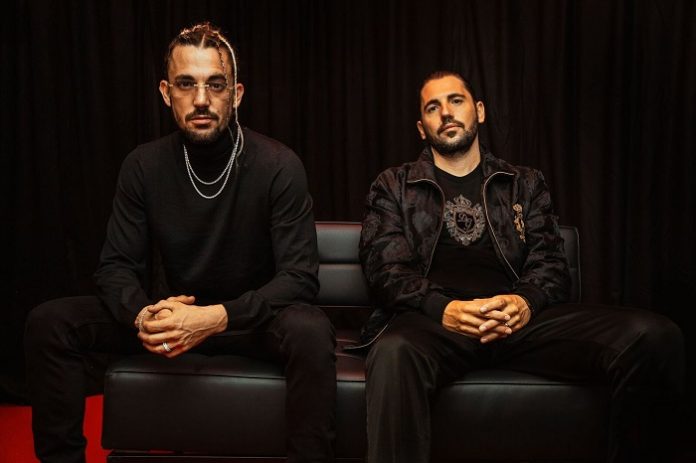 Dimitri Vegas & Like Mike have a long running history with good friend Steve Aoki under their 3 Are Legend alias, exciting fans with performances at Tomorrowland, Creamfields and Ultra Music Festival, and more recently at last year’s Untold Festival, and the power trio combine once again for the huge ‘Raver Dome’.

Drafting in the production talents of Dutch prodigies Justin Prime and Sandro Silva for an uplifting anthem that is set to raise spirits worldwide upon its release, ‘Raver Dome’ follows on from previous hits such as the 3 Are Legend remix of Dimitri & Like Mike’s epic ‘Crowd Control’ phenomenon, and 2019’s ‘Khaleesi’, which stands at over 5 million streams on Spotify alone.

The track centres around an instantly memorable melody, which is quickly joined by vast harmonics on the breakdown that help to establish a wall of musicality that fills the sonic space and provides a euphony that is both uplifting and guaranteed to get the party into full gear.

The drop sees the introduction of a heavy, distorted kick that propels the track forward with added venom, ensuring that fans will be moving to the beat wherever they happen to be listening.

Label bosses and current world #1 DJ’s Dimitri Vegas & Like Mike have excelled even by their own standards with their collaborative output, chalking up more than 150 million streams on their David Guetta, Natti Natasha, Daddy Yankee & Afro Bros collab ‘Instagram’. 2x Grammy-nominated Steve Aoki is fresh off the back of his epic 27-track Neon Future IV album, which includes Alan Walker collaboration ‘Are You Lonely (feat. ISAK),’ “RAVE (feat. Kris Kiss)’ alongside Showtek & MAKJ, and works with the Backstreet Boys, Maluma, Monsta X and several other artists.

Justin Prime and Sandro Silva have also been on the front foot in recent months, clocking up collective support from the likes of W&W, David Guetta, Ummet Ozcan and Knife Party. The Belgian brothers once again display their desire to continue providing innovate and forward-thinking music with this latest alliance, as ‘Raver Dome’ is as fresh as you’d expect from the coming together of such musical juggernauts.