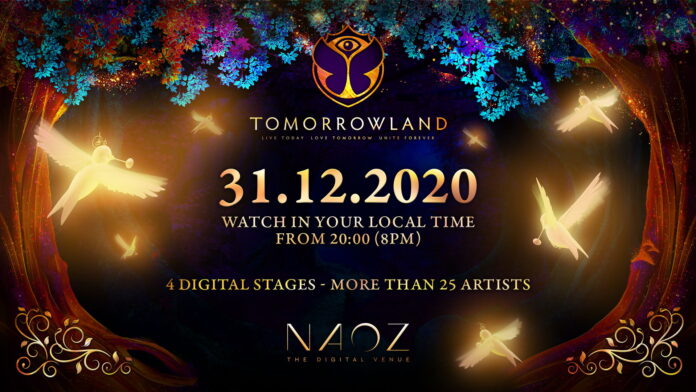 World’s best electronic dance music festival, Tomorrowland is pulling back the curtain to unveil their next virtual chapter after highly successful edition of their first ever digital festival “Tomorrowland Around The World” which left the people of tomorrow in awe.

Having teased the announcement with a countdown last week, the hard-working team behind Tomorrowland have now announced all the details of their upcoming virtual New Year’s Eve festival.

This unique digital festival on the biggest night of the year will start at 20:00 (8pm) local time in all 27 time zones in the world, giving people from all over the globe, from Fiji to Hawaii, from Tokyo to Santiago, an opportunity to end this year with a bang.

Tomorrowland 31.12.2020 gathers more than twenty-five of the planet’s best artists who will perform on 4 mesmerizing digital stages in the brand-new digital entertainment venue NAOZ.

Check the official lineup below!

Continuing with the success of Tomorrowland‘s first ever digital festival “Tomorrowland Around the World” – documented in the behind-the-scenes documentary Never stop the music – The Creation of Tomorrowland 2020 – the festival is again using the world’s best technology in 3D design, video production and special effects to bring together a spectacular experience on the biggest night of the year.

Ticket sales start on Tuesday November 17 at 17:00 CET via tomorrowland.com.