The Global superstar, DJ and producer Oliver Heldens has announced his first foray into the NFT world Oli Pods: The Genesis NFT collection which he is launching with OneOf, the go-to Web3 platform for music, sports and lifestyle. With numerous hits and over 2 billion streams to his name, Heldens has joined forces with designer and fellow Netherlands-native Dennis Osseweijer (Oxcraft) to create an awesomely animated series of collectibles. Available in four distinct tiers of NFTs, the Oli Pods feature 3D avatars of Heldens as versions of different characters, dancing and posing to a soundtrack of his signature, original high-octane beats, he produced.

On Thursday, June 9th, the first Oli Pod and Green Tier NFT, Oli Gecko, will launch, ahead of a brand new single with Tchami and Anabel Englund that Heldens is set to release the following day. The next three Oli Pods – Oli Koala (Gold Tier), Oli Darko (Platinum Tier) and Oli Hasta La Banana (Diamond Tier) – are all slated to drop on Thursday, June 16th.

While Oli Gecko and Oli Koala are inspired by the titles of two of Oliver Heldens‘ biggest hits, Oli Darko hints at another new track he has been teasing throughout a run of major festival appearances in 2022.

Each tier of Oli Pods will also include additional perks and utilities such as VIP concert tickets, backstage passes, meet and greets, a personalized platinum record plaque of Gecko, exclusive merchandise, private listening & viewing links to music and videos before they are officially released to the public, video calls, and more that fans can collect and learn about at the link. 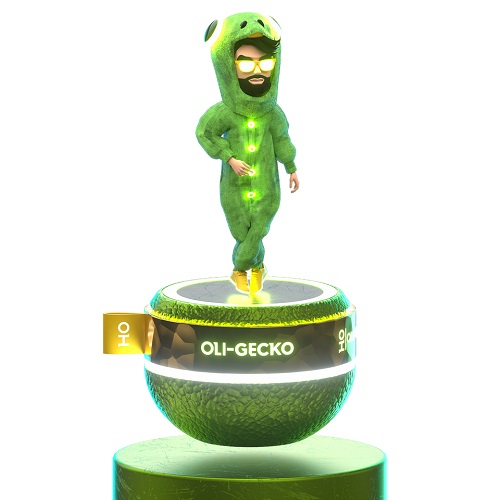 At 2:30pm EDT on Friday, June 10th, Oliver Heldens will go live on Twitter Spaces with NFT now to discuss Oli Pods, the special utility of music NFTs and more.

On the launch of Oli Pods, Oliver Heldens says, “As someone who has been learning about the NFT space for quite some time, I am extremely excited to welcome fans into Web3 and the broader Oli-verse, especially with the low-cost and energy-efficient possibilities that OneOf is able to provide.”

Using up to two million times less energy to mint an NFT than other networks, OneOf is the leading platform paving the way towards a more fan-friendly, inclusive and environmentally sustainable web3 future. Users can purchase their NFTs with credit/debit cards as well as many top cryptocurrencies including BTC, ETH, Tezos, Matic, and USDC, while OneOf offers partners the option to donate portions of their NFT proceeds to charities of their choice.

Speaking on the collaboration, Michael Peha, VP of Artist Acquisitions, from OneOf states, “Oliver Heldens is an innovative artist who puts his heart and soul into every endeavor. We’re proud to partner with Oliver on Oli Pods and show the fans another side of his creativity.”

OneOf has launched the debut NFT collections from artists such as G-Eazy, Cordae, Doja Cat, Masego and more. The company has also formed partnerships with eBay, The Recording Academy, Warner Music Group, The Breakfast Club, Sports Illustrated, iHeartRadio Music Festival and The Whitney Houston Estate, in addition to their recent introduction of CO//SIGN, a new program empowering music’s next generation of breakout stars through NFTs and Web3 technology.