EXIT Festival is renowned for its eclectic and multi-genre mix of the absolute cream in music from across the world – including commercial acts, electronic and underground DJs and producers, the best in metal and guitar bands, not to mention incredible trap and hip hop crews, latino crews – proving that EXITs strength lies in its musical uniqueness and diversity.

This year’s edition of the EXIT Festival will carry the slogan “Together. Always!” and will be taking place 7th – 10th July at the Petrovaradin Fortress, Novi Sad, Serbia. 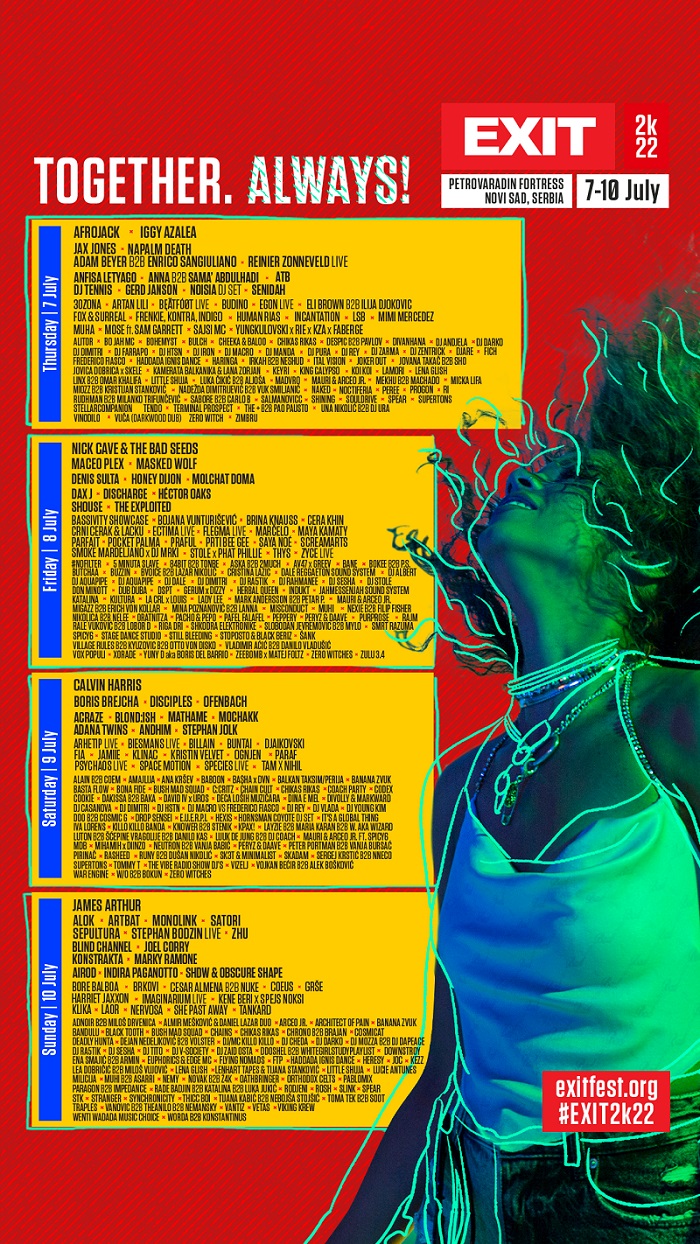 MAIN STAGE
This year’s world class EXIT main stage headliners come in the shape of Main Stage this year are Calvin Harris and Nick Cave & The Bad Seeds. Iggy Azalea, James Arthur, Masked Wolf, Afrojack, Ofenbach, Disciples, Joel Corry, Jax Jones, Alok, ATB, ZHU, ACRAZE and Shouse. Joining them will be the cream of metal acts – Sepultura, Napalm Death, Molchat Doma, Downstroy and Alitor. EXIT also is a huge supporter of the regional scene – providing main stage shows to acts such as Konstrakta and Senidah – region’s most sought-after female acts. The exclusive hip hop/trap showcase “Back To The Future” will have its world premiere on the Main Stage, with Ajs Nigrutin & Timbe vs Crni Cerak & Lacku from Serbia, Frenkie, Kontra, Indigo vs Muha from Bosnia and Herzegovina Stole vs 30zona from Croatia will battle it out on mics as well as the recently announced Iva Lorens, Divolly & Markward and Lady Lee.

EXITs world famous MTS Dance Arena is internationally renowned for being the biggest and best partY in the world, and this year is no exception. Thursday is reserved for top B2B sets, starring Adam Beyer and Enrico Sangiuliano, ANNA and Sama’ Abdulhadi, Eli Brown and Ilija Djokovic, along with Reinier Zonneveld live, Anfisa Letyago and Human Rias. On Friday, Maceo Plex, Honey Dijon, Denis Sulta, Brina Knauss, 84Bit B2B Tonbe, and Cristina Lazic will pick up where the others left off. Hi-tech minimal techno specialist Boris Brejcha will be accompanied by Mathame, Blond:ish, Mochakk, Bona Fidea and Space Motion. Sunday will see electronic music virtuoso Stephan Bodzin with his live performance, accompanied by melodic artists Monolink and Satori as well as Coeus, Kezz and Cosmicat. One of the most coveted time slots at Exit — the closing of the mts Dance Arena and the entire festival on Sunday — will be given to the Ukrainian superstar duo ARTBAT.

A four-day celebration of the alternative electronic scene will take place on the nearby No Sleep Novi Sad awakened by Guarana stage. The spirit of the Berlin club Watergate will be delivered by Adana Twins, Andhim, Stephan Jolk, Biesmans live and Jamiie B2B Kristin Velvet, while the bright techno flag of Madrid’s Fabrika and CODE parties is waved by Cesar Almena B2B Nuke, SHDW & Obscure Shape, Indira Paganotto, Airod and Ddoshel B2B Whitegirlstudyplaylist. The experience of the Life and Death showcase will be provided by DJ Tennis, Gerd Janson, Budino, Beatfoot live and Stellarcompanion, and the ultimate hard-techno energy will be shared by the Possession crew – Dax J, Hector Oaks, Parfait, Cera Khin, Muhi and Katalina.

EXIT is not just about having the biggest stages. The soul of the festival is in the smaller ones, which have been gathering fans of certain genres at the Fortress for years. These include reggae epicentre Wenti Wadada Positive Vibrations Reggae; a firm favourite since 2001, the capital of drum’n’bass also known as the X-Bass Pit, as well as the hyper-energetic Gaia Trance Xperiment. Local acts will shine on one of the festival’s longest-running stages Urban Bug; the hits are reserved for AS FM powered by Guarana and Silent Disco, while the fiery Aqua Viva Latino stage is in charge of the Latino beats.

EXIT will also present a new stage dedicated to house music this year, giving eager fans a grand total of an immense 40 stages and zones, and some of them never seen before.