Above & Beyond close out the second half of their ’10 Years of Group Therapy’ celebrations with a remix from UK drum and bass mainstay Etherwood. The Hospital records regular takes the reins on ‘Giving It Out’ from Above & Beyond‘s seminal Group Therapy album, which features vocals from longtime collaborator Zoë Johnston.

A regular feature on Hospital Records, his studio albums ‘Etherwood’ and ‘Blue Leaves’ peaked at #4 and #3 in the UK Dance Charts, and his top five tracks on Spotify have over 20m combined streams. Nearly a decade on from his debut release, Etherwood continues to be in high demand on club circuits worldwide, with upcoming shows Depot Mayfield, Motion, Marble Factory, and Dreamland Margate. 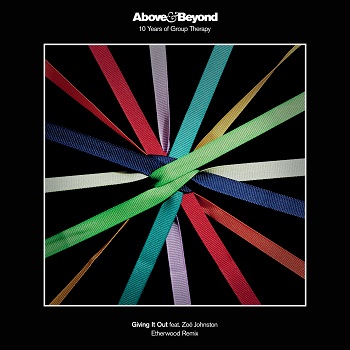 “I was so stoked when I was asked to remix this tune!” says Etherwood. “I’ve always loved Above & Beyond so naturally it felt like a real honour to put my spin on ‘Giving It Out.’ I wanted to isolate the vocal and build a nice long intro before the drop. Hope ya’ll like it,” Etherwood continues.

In 2021, GRAMMY-nominated dance trio Above & Beyond kicked off the 10th-anniversary celebrations of their critically-acclaimed second studio album, ‘Group Therapy.’ To mark the occasion, an eclectic selection of acts took on the challenge of remixing ten iconic tracks from the 2011 album. The first part of this cross-genre remix compilation included reworks from ilan Bluestone, Oliver Heldens, Spencer Brown, CRi, Kasablanca, Manila Killa, and more.

For part two of the ‘10 Years of Group Therapy‘ celebrations, twelve more remixers have stepped up to the plate, including Maor Levi, William Orbit, Fehrplay, Nourey, Etherwood, and more. The package also includes Sunny Lax‘s mix of ‘Sun In Your Eyes‘, the closing track on Anjunabeats Volume 15, and Blastoyz‘ psytrance remix of ‘Sun & Moon‘, played by Above & Beyond in their Group Therapy 400 celebrations.

The vinyl box set also includes a special ‘10 Years of Group Therapy’ slipmat and 12″x12″ matte-finish prints of each single artwork. This box set is a limited, hand-numbered edition and is expected to ship in the autumn of 2022. Pre-orders are available now at the Anjuna Music Store. Every box set comes with a digital download of the original album and all remixes on the ‘10 Years of Group Therapy’ digital compilation.

Listen to the compilation ‘10 Years of Group Therapy (Part 2)‘