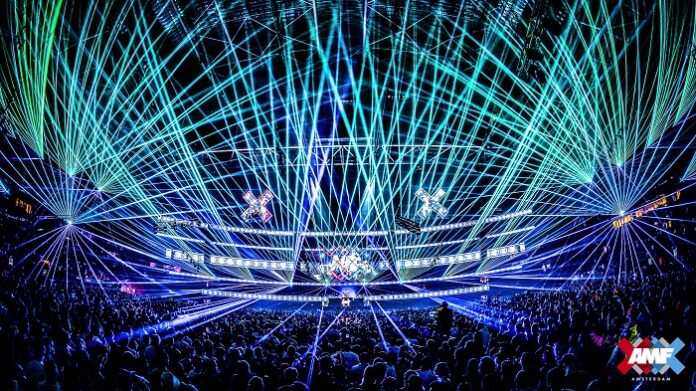 A selection of the world’s biggest dance music stars took center stage last Saturday at the Johan Cruijff ArenA in Amsterdam for Amsterdam Music Festival – AMF. Armin van Buuren, Martin Garrix, Tiësto, Afrojack and Nicky Romero (II=I) were among those performing at the sold-out event in front of 40.000 fans. AMF streamed all performances live on their own AMF.tv channel in collaboration with TikTok, garnering over hundreds of thousands viewers across all platforms.

AMF has played host to the world’s leading artists for a decade now, celebrating its 10th anniversary this year. From veteran acts like Armin van Buuren and Tiësto to the new generation of dance music mainstays Martin Garrix, Afrojack and Nicky Romero. To celebrate this milestone event organizers ALDA and Insomniac turned the ArenA into the biggest nightclub for one night, with a 360 degree stage design including a full motion roof. AMF had something on offer for a wide array of fans, music and show-wise.

As part of AMF‘s special II=I concept, Afrojack and Nicky Romero teamed up for an energetic performance. The two performed their new collaborative track – which will be out on November 4th – for the very first time on stage at AMF. Additionally the two come from the same generation of acts rising up out of the Netherlands, making this back-to-back set even more special.

Tiësto also performed in the buzzing Johan Cruijff ArenA. He’s at the top of his game, solidifying his title as one of the world’s most renowned DJ and producers of all time. It’s been a while since he performed in his home country, which resulted in a truly iconic moment during the night.

After Tiësto, Martin Garrix is perhaps the most heard name in dance. The young DJ and producer has been named the best DJ in the world three times since 2016, making him the youngest artist ever to top the list. He played the AMF stage for the last time back in 2015. For this year’s performance the expectations were high, but he delivered and took the crowd along with him on a ninety minute high-energy musical journey.

Just minutes before Armin van Buuren entered the stage, he hosted his very first radio show on Dutch radio station 538. Live from the ArenA he welcomed none other than Mau P, Martin Garrix and Alesso, Afrojack and Nicky Romero in the studio for interviews.

Rounding off the line-up of this year’s AMF are an eclectic bunch of acts, Australian party-starter Timmy Trumpet, German hit-maker Topic and Dutch hardstyle champion Brennan Heart. Topic loosened up the crowd with chart-topping originals Breaking Me and Your Love. After the slew of dance music mega stars Timmy Trumpet and Brennan Heart closed the ArenA in their signature highly energetic styles.