The Italian EDM duo Flaremode is two longtime friends, Jonny and Francesco, that have been on a grind with 2017 being their flagship year.

They have been making the most of the year so far with a massive Asia Tour, and making their debut on Armada Music’s label “Eclypse Records“.

The song, titled “My Religion” was produced in collaboration with the hot duo BLKWHT, and it’s already played and supported by names like Don Diablo, YVES V, Ummet Ozcan, Tommy Trash, Feenixpawl and many more.

With support from Nicky Romero and Timmy Trumpet, these two guys have the possibility to make 2018 their year. If they keep releasing music like their recent hit, ‘Cocobolo‘, success is in their near future!

Check out the track below!

Flaremode & Hard Lights Are Ready To Take You To “Another Level” 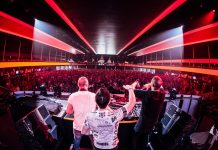 Mad M.A.C. & Flaremode Team Up once again for the thunderous single ‘Madagascar’