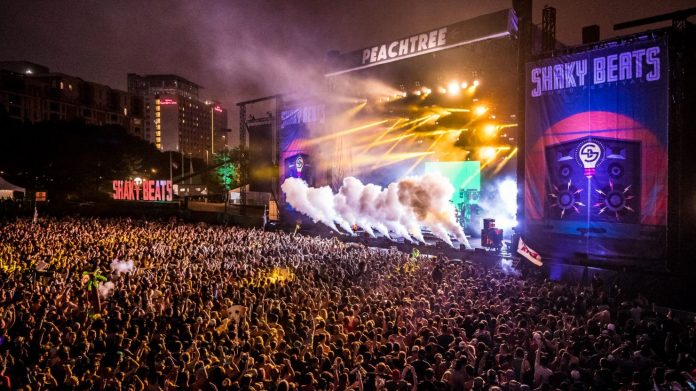 Since its beginning, the Atlanta based electronic dance music festival, Shaky Beats, has been one of the best non-camping music festivals in the country. Where the festival seems to largely bypass the radar of the national electronic dance music fanbase, people need to be aware that Shaky Beats should be on the priority list for dancing machines to attend during their festival hopping adventures this season.

Shaky Beats inaugural year was 2016, and musically speaking, it was one of the most memorable experiences imaginable. Porter Robinson, Duke Dumont, Yellow Claw Zhu, Big Gigantic, Major Lazer, Jai Wolf, and an unforgettable Odesza performance, where the Atlanta Falcon’s Drum Line came on stage to join them, all blew everyone’s mind.

The in-city setting was glorious, and attendees were just non-stop dancing the whole time on all three days, the crowd was full of love and positivity, and anybody that was there is sure to have the experience etched into their being forevermore.

With a hard to top first year, the following year in 2017 was going to need some help matching such a phenomenal prior event. Shaky Beats delivered once again. With a very similar atmosphere and setting, the results in terms of top-tier music festival experience were unwavering, Shaky Beats killed it. Headliners Griz, RL Grime, Bonobo (live), Kaskade, Flosstradamus, Galantis, Zeds Dead, Girl Talk, and arguably the best DJ set ever to date by The Chainsmokers were all next level music experiences.

If there were any doubters left that Shaky Beats was not one of the best music festivals to attend for music purposes, 2018 put them to ease with knowing that it is, in fact, a musically dominating festival. They know exactly what it takes to move a crowd.

The festival did change locations from Centennial Olympic Park in 2018, across town to Central Park, which has become the festivals new home. The move spread out the festival grounds significantly and opened up the stage areas. The new location also gave attendees plenty of trees for shade and chill spots. Headliners and next level performances at the 2018 event were Kygo, Marshmello, Zedd, Excision, Dillon Francis, Seven Lions, San Holo and Borgore.

While the festival did shed the Sunday portion of the event for the 2019 rendition, it did not take away any potency from the lineup. An eclectic and top tier lineup is going to help them continue their reign as rulers of the heady music festival realm. This year headliners Martin Garrix, Rufus Du Sol, Big Gigantic, Fisher, San Holo, and Gryffin all lead an exalted support system that is going to combine to unleash an unforgettable music festival experience.

A recent release from Shaky Beats on Monday announced that Galantis would be added to the list of performing artists, and make a second appearance to the festival. Shaky Beats should be on the radar as an event that can not be missed. We will see everybody there. The Lineup by day will be dropping soon, stay tuned for more information.