Oliver Heldens is expanding his Heldeep 5 World Tour once again with the announcement of a four-date resident series at BCM Mallorca. Kicking off on July 3rd, Heldens will bring his inimitable sound to the biggest nightclub in Mallorca with additional dates locked in for July 15th, July 30th and August 14th.

Since embarking on the first leg of the world tour earlier this month throughout North America, The Dutch DJ/producer has put on state-of-the-art productions across the USA, Canada, Dominican Republic and Mexico to celebrate 5 years of Heldeep Records. Acclaimed by fans and media alike, the unmissable Heldeep 5 events take the audience on a musical journey with a catalogue of crowd-favourites from the past five years.

Located on the beautiful Balearic sea, BCM Mallorca welcomes thousands of international guests each year, making the venue a perfect host to showcase the remarkable event to another diverse audience. 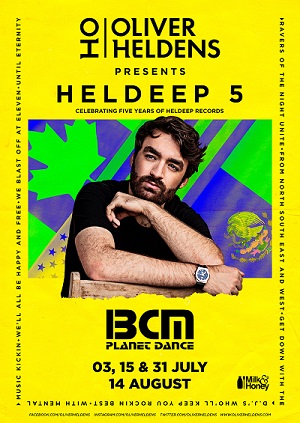 Your EDM reviewed the Heldeep 250 event in New York saying, ‘The set was on point and Oliver’s production completely blew my mind with all variety of tropical land and sea animals decorating the venue’s massive LED screen.’

While The Nocturnal Times said, ‘Oliver Heldens’ consistent high-spirited energy always lights up the atmosphere no matter where in the world he may reside, and it was clear that he was just as thrilled as us to be commemorating such an exciting milestone in his career.’

Heldens will bring a bunch of sought-after acts to join him at the iconic BCM Mallorca. Stay tuned for more announcements to come.