Coming off the madness of his World of Slime tour, which has become his biggest headline tour to date, Dubstep DJ and Producer, SNAILS shares his highly anticipated World of Slime EP, a jam-packed eight track EP, full of SNAILS’ signature wubs alongside collaborations with some of bass music’s finest artists.

Kicking off the EP is a SNAILS and Barely Alive collaboration “Grime Rate” which has other worldly and insanely heavy drops, followed by the recent single with Kill The Noise & Sullivan King “Front To Back.” Next up is the recently released “System Overload” featuring Kompany & Virus Syndicate, and previous single“RKO” featuring Rico Act.

Another new release is “Tear It Up” featuring Carbin and Big Ali that has earth-shattering bass that will leave fans weak in the knees, then the hit “SNAILCLOPS” featuring Subtronics and “Jackhammer” featuring Krimer.

Last on the tracklist is “Snailephant VIP” featuring Wooli, a special version of the track that SNAILS has been playing out for months, and one that fans have been eagerly waiting on. 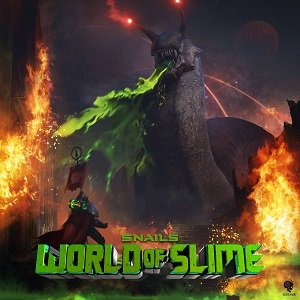 “So excited to finally be dropping the World of Slime EP and share these insane collabs with the world! It was awesome getting to work with some of my biggest influences for this project. Welcome to the World of Slime!!” – SNAILS

In addition to new music and his biggest tour yet, SNAILS just dropped the second volume of his The Shell comic book series called MISSION: SLUGGTOPIA. Check it out here. Join King Slugz as he travels back to where it all began. What secrets does The Shell still hold? Can Sluggtopia be saved once and for all? There’s only one way to find out!

SNAILS is currently wrapping up his World Of Slime tour with closing out shows coming up in Atlanta, Chicago, Detroit and more. The tour features state of the art holographic technology, brand new visuals and SNAILS’ custom Shell 2.0 stage production creates a more immersive environment for attendees.

Tickets are on sale here and preview the tour visuals here on SNAILS’ Instagram.