Last summer Morillo resurfaced the acclaimed SONDOS imprint, a division under the umbrella of his co-founded Subliminal Records, with the aim of releasing more of the kind of organic, dancefloor-ready sounds that brought it much success at the turn of the century. ‘Afrotech‘ is a perfect example of this. 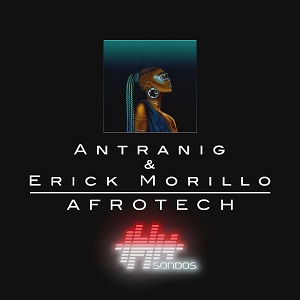 “I’m very excited about my first release of 2020,” Erick explains.

“It’s a deep, techy, groovy track that I’ve been playing since ADE 2019. It always gets an amazing reaction and at last year’s Elrow ADE event it completely blew up the dance floor. Antranig is a very talented fellow New Jersey producer who is no stranger to the scene. Last year he received my Beatport #1 with ‘Back 2 House’, also released on SONDOS, and I really enjoyed producing ‘Afrotech’ with him” he added.

Over the last few years Antranig has reemerged as a formidable powerhouse in the dance music scene, releasing a slew of hit productions and remixes, playing at some of the biggest clubs on the planet, and being touted by dance music giants around the globe as one of the most important talents in the scene today. His tracks have been consistently playlisted by a long list of elite DJs, such as Morillo, David Guetta, Carl Cox, Steve Angello, Axwell and many more.

Releasing his first record back in 1992 on the iconic Strictly Rhythm imprint, Morillo is now into the 27th year of his illustrious music career, and remains as consistent in his output as ever.

Enhancing his reputation with his weekly ‘Sessions’ parties in New York, it wasn’t long before the platinum-selling artist was throwing some of the biggest parties in dance music, including the annual Subliminal Sessions at the Miami Winter Music Conference and his now-legendary Pacha Ibiza residency. Meanwhile his longstanding ‘Erick Morillo Presents Subliminal Sessions‘ radio show is currently broadcast in 54 different countries.

A gloriously understated yet infectious slice of house music, ‘Afrotech‘ sees Erick Morillo back to his best alongside Antranig.