With 500,000 views in less than 48 hours, and emotional video has become a massive social media hit throughout Germany. Created by WORLD CLUB DOME visionary Bernd Breiter, “TheWorld Stands Still” is an emotionally honest video message reflecting the current worldwide pandemic. Stars of the electronic music world, such as superstar DJ Steve Aoki, were touched, offering their support to the message: “That’s why we decided to create an English version of the clip. International acts and DJs with whom we are friends asked about it, hoping to share the message with their fans.”

Bernd Breiter is a once in a lifetime visionary – he created the “largest club in the world”, built the first club in zero gravity, transformed cruise ships into floating clubs, turned planes into dance floors and sent the first DJ into space. His incredible and ambitious vision of seamlessly interweaving science with entertainment has inspired young people nationwide to once again look to stars.

Along with the European Space Agency (ESA), Bernd has also inspired countless media channels around the world. Most recently at an event in Hollywood, true legends of the silver screen such as Morgan Freeman, John Travolta, and Robert De Niro welcomed an audience with the Frankfurt-based entrepreneur.

But as one day turned to another, the world was no longer the same. Overnight, life as we knew it had turned upside down. The entire world shuddered to a halt. The virus that had paralyzed the planet also had a huge impact on Bernd Breiter‘s future vision of staging major events.

20 years ago, he identified the ‘big city weekend feeling’ and defined it as “BigCityBeats” – big city heartbeats beating faster and louder the closer the weekend gets. Meeting friends, eating out together and then partying in the cities best clubs, or at the world’s biggest festivals, all of this was suddenly impossible.

The family man, who, like many others, has been shocked by the massive spread of the pandemic, also had a vision in this situation too. For years he has been able to convey ideas emotionally and succinctly through various visuals and productions. And this is the exact medium that BigCityBeats wished to use to make it clear to the large electronic music community, and to everyone around the world, the importance of #StayHome.

The BigCityBeats team organizes events that welcome 400,000 visitors annually, and together they’re appealing to everyone at home. Reminding them that it’s absolutely essential to avoid contact with others.

“This is the only way we can curb the spread of the virus because only then will we all be able to meet friends again, celebrate together and travel to the world’s largest festivals,” said the 49-year-old.

“Freedom has not been granted by God, instead, it has been hard-earned over many generations. We are aware of this now more than ever. And while public life has been brought to an abrupt standstill with 99 percent of the population forced indoors, there are others fearlessly turning their lives upside down to save lives: doctors, nurses, supermarket employees, and bakers,” explains the Frankfurt resident.

The message of the video continues by thanking the heroic people risking their lives on a daily basis. And with motivation and perseverance, he is convinced that “in the future, we will treasure life much more intensely and find new appreciation in the values, that for years have seemed so natural to us.”

For four nights the visionary mind behind BigCityBeats worked on the two-minute clip. The powerful message behind “The world stands still” continues to grow in strength and resonance.

Upon its first two days of release the German edition went viral being viewed across Facebook, Instagram and YouTube more than 500,000 times “I never expected the video to spread so quickly,” says Bernd Breiter. 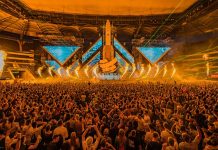