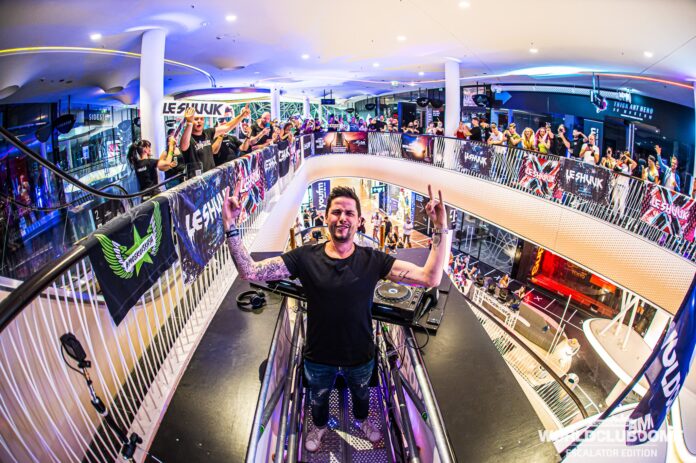 Another innovative socially distanced event solution made its debut over the past weekend just for your listening pleasure. BigCityBeats have organized a very special DJ set on the longest self supporting escalator in Europe.

BigCityBeats CEO Bernd Breiter and his fantastic team repeatedly create unique one of a kind concepts and things have been no different during the Corona Crisis. The Frankfurt based family company surpasses creative ingenuity on an almost weekly basis. This was once again the case last weekend at the BigCityBeats WORLD CLUB DOME Escalator Edition in (and on) the MyZeil shopping center in Frankfurt.

When the weather obeyed the sunset provided a captivating backdrop to incredible sets by DJs such as Paul Lomax, Felix Kröcher and Moguai, amongst a collection of others. Creating the perfect sound for the perfect sunset – in front of the fantastic backdrop of the Frankfurt skyline, the skyline itself seeming almost within reach. The performance of top violinist Marisha rounded off a mesmerising picture.

After the MyZeil shopping centre had closed its doors to the public, an elaborately constructed DJ stage and setup was installed on the escalator. At 42 meters, the MyZeil escalator is the longest self – supporting, internal escalator in Europe, and connects the ground floor to the fourth floor. And while the custom made DJ booth was securely attached by specialist personnel, a momentous press conference took place with Bernd Breiter as host.

Taking place in Frankfurt’s new culinary and gastronomic experience FOODTOPIA, it was here that the 49-year-old CEO talked about past BigCityBeats events, the current project and future plans.

And at 10:00pm, ‘VIZE’ a hotly anticipated ‘new superstar DJ’ played the opening set on Europe’s longest self-supporting internal escalator. BigCityBeats Resident DJ Le Shuuk followed the opening act and played until midnight. During this event the audience were all standing safe, sufficiently social distanced apart. From the ground floor to the fourth floor the audience were separated on all five floors. 100 competition winners were watching live from the first beat to the last note.

And on this incredible occasion the DJ was transported to the audience. BigCityBeats believes that if the people can’t go to the DJ, then BigCityBeats will bring the DJ to the people…via escalator.

There was also a fantastic atmosphere in the BigCityBeats Club Kitchen, where good humoured pizza bakers from Papa Napoli whirled their dough through the air, while at the same time professional bartenders from BarPhilosophy provided exceptional cocktail creations. And with a BigCityBeats GLAM on a separate floor there was a very elusive and exclusive VIP area, where were many meetings with influencers and stars from the social media industry.

BigCityBeats wrote its way into music history by being responsible for setting an unbelievable five world records. Beginning with a prominent flight into weightlessness in March 2019, in August 2019 the 1st DJ set live from space took place in the ISS, and in April 2020, the 1st stadium event was held during the Corona Crisis live from the Commerzbank Arena in Frankfurt.

In the very same month BigCityBeats became the organiser of the world’s first live club concert in the Dusseldorf drive in cinema. The BigCityBeats WORLD CLUB DOME Escalator Edition set the next two records. To others they might seem like impossible ideas but to Bernd Breiter and his amazing team there’s no such thing as impossible. Be prepared for what he has in store next.

“As a Frankfurt company BigCityBeats GmbH has always implemented outstanding event concepts. Even if it is a shame that a WORLD CLUB DOME in its usual form cannot take place this year, the city is already looking forward to a terrific WORLD CLUB DOME 2021.”

“The MyZeil shopping center is proud to have been part of the last roof session. The Expressway, the highest self-supporting escalator in Europe, was used for the first time as a DJ desk, and was therefore the platform for the unique Escalator Edition. The livestream sessions are very important for the event scene,” said center manager Annet Gurczinski.

“Extraordinary times, extraordinary events, extraordinary location! That’s what the Roof Sessions showed. We are pleased that we were part of these unique roof sessions,” said Juliette Schwartz, Director of Sales and Marketing Jumeirah Hotel Frankfurt. 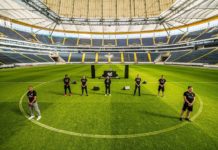