500,000 headliners are expected through this year’s gates. This year, ALDA will host the distinctive circuitGROUNDS stage, which will be graced by dance music’s most exhilarating talents, including deadmau5, Martin Garrix, Alison Wonderland, Jauz, Benny Benassi, Slander and many more.

Pasquale Rotella, Allan Hardenberg and David Lewis finalised an international partnership between their respective companies, Insomniac and ALDA back in 2018, looking to expand their international event footprints ever since.

Together, Insomniac and their European partners have now worked meticulously to combine world class DJ talent and innovative stage design for this year’s circuitGROUNDS stage at the upcoming 25-year anniversary edition of EDC Las Vegas.

The stage is a stalwart of the festival and has earned a reputation over the years, lighting up the night sky with LED walls and plumes of fire that ignite an atmosphere and enhance the unique, audio-visual spectacle. Shuffling an extensive, and awe-inspiring roster of artists that were announced for the festival back in June, the circuitGROUNDS stage will offer one of its most eclectic bills to date across the entirety of the 3-day festival this year. 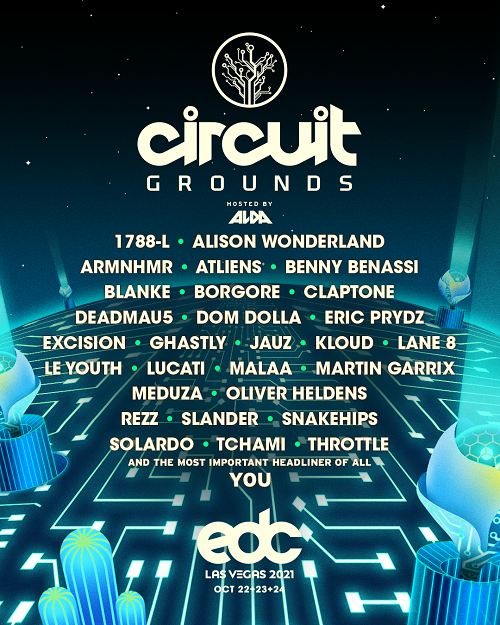 During previous editions of EDC, Insomniac have taken great pride in establishing their lineups, but even more so in 2021 now that ALDA will join them in showcasing the best the dance music scene has to offer. Bringing unrivaled energy to the stage, the circuitGROUNDS arena begins in offering up some of the most prestigious names in house music in the likes of Benny Benassi, Claptone, Dom Dolla, Malaa, Martin Garrix, Oliver Heldens, Solardo, Snakehips, Throttle and Tchami.

Some of the finest electro and techno acts will also take to the decks between October 22-24, with diligent DJ talents deadmau5, Rezz and Eric Prydz bringing an air of reputation to the party. To top off the circuitGROUNDS roster, Pasquale Rotella and Allan Hardenberg have sought after the serene beats of Lane 8, Le Youth and Meduza as the ultimate additions to a comprehensive stage line-up.

“ALDA will proudly host the circuitGROUNDS stage at EDC Vegas this year and we are very excited for what is to come. It’s a pleasure to be collaborating with Insomniac once more, and we’re very proud to be strengthening our relationship with them creatively on one of the largest festivals in the world. Our multiple-decade long experience in developing, and promoting electronic music and DJ concepts, will no doubt prove useful in providing festival-goers with an unprecedented EDC experience this year“, said Allan Hardenberg , CEO of ALDA.

“ALDA have joined us as European partners ahead of EDC Las Vegas 2021. Working with ALDA, we have integrated and involved their team in developing ground-breaking concepts for the circuitGROUNDS stage this year. Combining the years of events experience between us, we aim to bring ravers a more unique experience than ever seen before in celebration of a magical 25 years of the festival“, added Pasquale Rotella, Founder of Insomniac.

circuitGROUNDS is just one of the many trailblazing stages that will make up the legendary EDC Las Vegas experience. The Las Vegas Motor Speedway will also play host to kineticFIELD, cosmicMEADOW, neonGARDEN, bassPOD, wasteLAND, quantumVALLEY and stereoBLOOM, advocating other established names such as Alesso, Diplo, Afrojack, Seven Lions, Reinier Zonneveld and Knife Party among hundreds more.

EDC Las Vegas has become one of the most reputable dance music festivals over the past two decades, as an unprecedented culmination of art, music and love. The festival continues to boast incredible musical diversity, bringing countless sub-genres to thousands of infatuated fans.

During Amsterdam Dance Event, Insomniac brought its successful house and techno concept Secret Project Festival to European soil for the first time on 16 October. Boasting a sold-out crowd, the anticipation was extremely high in the run up to the event, which took place in the Hembrugterrein across five different stages, each with a different visual concept and styles of music for everyone to enjoy alongside sculptures, light fixtures and much more to be entertained by.

The festivalgoers partied well into the night, from the gates opening to a rush of those eager to see what the festival had in store for them at 12PM until 11PM to the sounds of the underground styles of relentless techno and deep, melodic house and tech-house with artists such as CamelPhat, Ben Böhmer and Loco Dice B2B Marco Carola spearheading the lineup. The industrial vibe of the location went hand in hand with the musical styles, creating a top-notch audio-visual delight for all involved. The Secret Project Festival European debut proved to be more than successful, solidifying another great location for the event.