DVBBS have taken the Dance Music scene by storm when the pair dropped their latest EP, “Beautiful Disaster” and an incredible remix for Steve Aoki & Louis Tomlinson’s “Just Hold On” back in February.

The brothers have been on fire as of late so it’s time now to reveal DVBBS‘ music video for “Not Going Home”, a collaboration with CMC$ featuring Gia Koka.

The track alone has over 45 million Spotify streams, climbing the Spotify Global Top 100 Chart, landing on the Top 50 in 8 countries, and added into rotation on Sirius XM BPM, iHeart Evolution Radio, Music Choice and more.

The boys are also announcing today that they have signed to Ultra Music and are wasting no time creating new music-their upcoming collaborations include 2 Chainz, Cody Simpson, and NERVO, which will be released very soon under the widely recognized record label.

As showcased on their six-song December EP Beautiful Disaster, Chris and Alex structure their new music around sunny melodies, catchy vocal tracks and even feel-good guitars, connecting the dots between trap beats, future house and electro, as well as the four-on-the-floor sound and blistering party bangers for which DVBBS is best known.

Take a listen to DVBBS‘s new track  “Not Going Home” below. 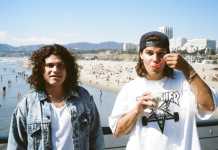