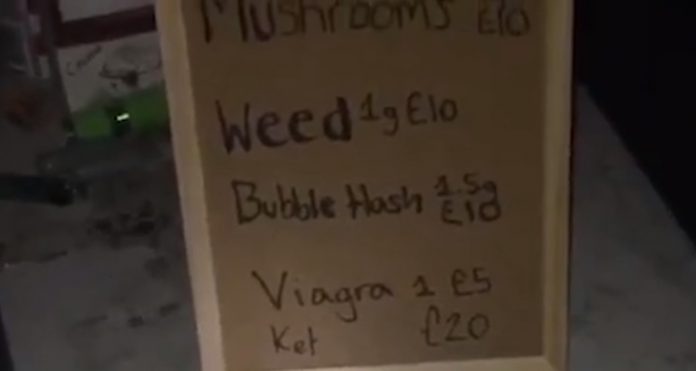 Over a hundred ravers are seen dancing to electronic dance music under multicoloured strobe lights and lasers at an underground illegal rave believed to have been held in Liverpool, England.

Video obtained by ‘LiverpoolEcho‘, shows several ravers in an underground room sit slumped with glazed eyes next to a sign that appears to sell ketamine for £20, mushrooms £10, viagra 1 £5, weed 1g £10 and bubble hash 1.5g £10.

This underground rave is only accessible by shimmying down a graffitied wall and walking through a secret tunnel. According to ravers, secrecy is key! If somehow word got through to the police about the event, they would shut it down immediately. In the United Kingdom rave scene was ruled illegal by the 1994 Criminal Justice Act: Any open-air gathering of more than 100 people playing “a succession of repetitive beats” should expect to be shut down.

Anonymous raver told Echo that at these ravers “attendees normally pay a £10 entry fee and can expect to cough up £5 for a beer. But you have to understand the cost that goes into these things. A lot of it is DIY. The people that run these raves commit a lot of their lives to it.”

“It’s a lifestyle choice for the organisers. For many, the only income they get is through these events” he added.

Earlier this year, police were called to a sewer at the mouth of Newcastle’s River Ouseburn on Saturday, following reports of a “potentially deadly” illegal rave.

Police and ambulance services have warned people to stay away from drugs and to keep hydrated at any dance music event.

Check some of the world’s most unusual and unique rave locations HERE.