Excision‘s Lost Lands Festival has come and gone but the wild and hilarious memories from the weekend will live on forever.

When I say forever, I actually mean it. The festival casually hosted the first ever a**-eating contest... This left attendee’s with either pink eye or video’s worth more than gold. If you haven’t seen these videos, check your social media platforms. Other notables from the weekend were the massive orange dinosaurs, the stage literally catching on fire and Excision’s insane set. Sounds like one hell of a fest.

Jeff Excision Abel took to Facebook following the event to get feedback from his loyal headbangers about possibly moving the dates for 2018. In his post he also talked about the stress and time constraints that were present leading up to the event.

Apparently Resonance Festival occurred the weekend before which left his set up crew only 4 days to prep and stage the entire show. He would later go on to say, “it is absolutely necessary to move the dates for the 2018 year.” 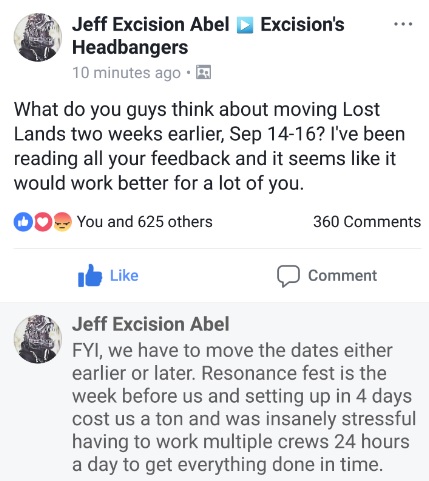 Next years show is set to take place September 14-16th. Check back for updates!