Love him or hate him, everyone’s favorite “gorestep” DJ is back and ready to take on the city of Brotherly love on December 1st.

Real name Asaf Borger, this LA based, Tel Aviv-born producer has been enthusiastically disrupting the electronic dance music scene since 2009 with his maniacal live shows and genre-destroying bass music.

Along with releasing some smash singles with the likes of Juicy J and Miley Cyrus, he has also formed his own record label, titled Buygore records, and is the inspiration behind the NSFW Twitter hashtag: #bootyforborgore.

Now, Borgore is back on the road for the last leg of his Blasphemy tour and is ready to take over The Fillmore in Philadelphia with some filthy, dub heavy vibes. He will make his stop in the city on December 1st, supported by openers Ray Vlope, Must D!E, Army of the 12 Monkeys, and Sweet Teeth. 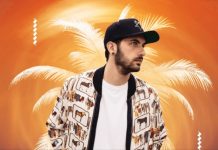