Showing her full support for the new bill being passed, mid-set the DJ gave the floor to a beautiful girl named Biba, so she could propose to her equally beautiful girlfriend on stage. Receiving a yes, the couple will officially be able to legally become married.

“Congrats to the two amazing women who got engaged during my set on the weekend. Australia just passsd the same sex marriage bill & I was so honoured to be able to help with this proposal. Love is love” 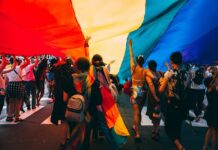 Exploring the History of LGBT Music