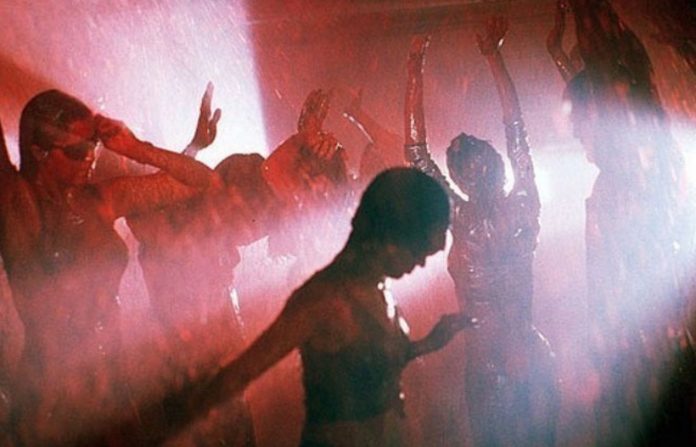 Many years after the cult classic vampire movie Blade was released, different event planners from parts of the world thought that it would be a good idea to recreate the rave opening scene from the movie where blood poured from the ceiling spickets and drenched the dancing vampires with it.

The first of the two re-creation events took place in Amsterdam, and the other took place during a comic convention pre-party in New York City.

In both places, the blood raves were smashing successes. Attendees got a chance to escape reality for a night, and imagine themselves as legitimate nightwalkers. Where several years have passed since the events took place, this is a public service announcement to party planners from around the globe to bring it back. The people have spoken, and they want more.

The blood raves brought out an eclectic mix of party people. People from all walks of life all joined together to take part in a fantasy role play that stretched the laws of imagination and put them in a world where they were actually immersed in the experience.

The blood that poured on them was not actual blood, but a safe synthetic. The event planners for the event in New York experimented with several different fake blood recipes, and it was reported that they even corresponded with the graphic death metal band GWAR to get things right. They ended up with 1,500 liters of odorless, nontoxic, water-soluble, synthetic blood.

In Amsterdam the event planners actually developed a sophisticated sprinkler system that ran special pipes across the ceiling. They tested it several times before using it in real time and publicly stated that they knew that it was pushing borders, but that they wanted to see how far they could take things. They knew that pouring synthetic blood over a dance party scene outside of a movie set was definitely going to raise some eyebrows.

Both events were on the cutting edge of throwing next level events. Blade was a badass movie, and giving people the opportunity to immerse into a fantasy realm is an extraordinary thing.

Recreating movie scenes is one thing, gathering people to a vampire-themed dance party event, where fake blood pours from the ceiling and covers the crowd in blood is something completely different; it truly raised the bar.

The real world is a difficult place to live in, it is easy to get caught up in the monotony of it and fall into the dull trap of day to day life. Experiencing events like a blood rave is certainly a platform to allow people to live outside of the box, and break molds.

Certainly, some people would find it totally bizarre, however, those are the people that need it the most. Bring the blood rave back, dance like nobody is watching while pretending to be a vampire for a night; now that is how it is done.