Dimitri Vegas, one half of Belgium’s favourite DJ duo Dimitri Vegas & Like Mike, strives to continually push the boundaries of possibility in the world of entertainment past his dominance in electronic dance music.

His latest venture will give fans the opportunity to play with a signature Sub-Zero themed character skin in the Mortal Kombat 11 videogame that is inspired by the superstar DJ and actor.

The Dimitri Vegas Sub-Zero character skin will be available as a free download for all Mortal Kombat 11 owners on Aug. 22 for PlayStation 4, PlayStation 4 Pro, the Xbox One family of devices including Xbox One X, PC and Nintendo Switch.

Dimitri is expertly placed to provide the motion capture and voiceover work for this custom character skin in the latest version of the critically acclaimed franchise after pursuing a flourishing acting career that has seen him cast in the forthcoming “Rambo V” film alongside Sylvester Stallone, as well as previous appearances in high-profile films such as “Lukas” with Jean-Claude Van Damme and providing the voice of Peter Parker in the Belgian version of animated film “Spiderman: Into the Spiderverse.”

Dimitri continues to excel in whichever facet of the entertainment industry he turns his hand to, and now avid followers have the chance to join the fight with the icy cool DJ in Mortal Kombat 11.

Dimitri‘s work with Mortal Kombat 11 also extended to the game’s London Reveal back in January, where he took part in a celebrity head-to-head tournament that featured other heavyweight names from the world of entertainment, from boxing star Chris Eubank Jr. to 10-time world heavyweight judo champion Teddy Riner, and many others.

Mortal Kombat 11 is the latest installment in the critically acclaimed franchise, providing a deeper and more personalized experience than ever before with an all new Custom Character Variation System that gives players the creative control to customize versions of the entire character roster. 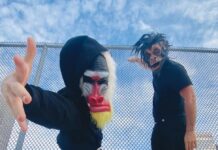