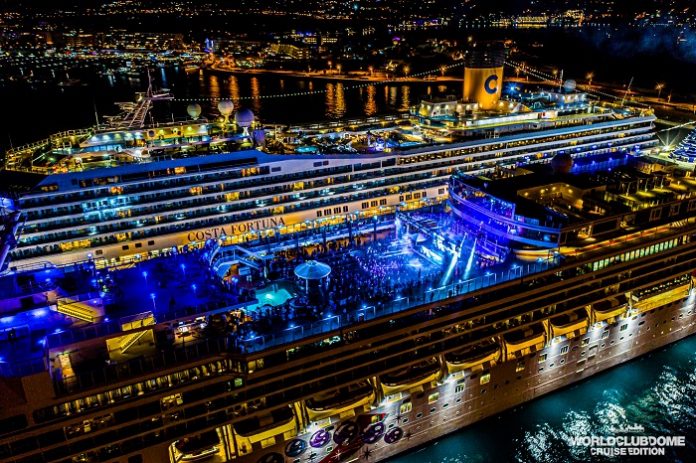 Fast forward to 2019 and BigCityBeats in partnership with the ESA shattered previous records with an otherworldly performance by ESA astronaut and current commander Luca Parmitano. At over 40,000 metres, Luca completed the highest DJ set of all times from the International Space Station and also became the first person in the universe to perform a set from outer space.

Luca’s set was undoubtedly a highlight of the third BigCityBeats WORLD CLUB DOME Cruise edition, which took place this year, which also saw the brand work in cooperation with cruise booking portal e-hoi for the first time in 2019.

With over 2,500 passengers, 50 top international DJs and 100 celebrities on board the Norwegian Pearl, the cruise departed from Barcelona via Ibiza and Sète and back to Barcelona. With a very special detour into space, the Norwegian Pearl connected to the ISS for Luca’s momentous 12-minute performance. 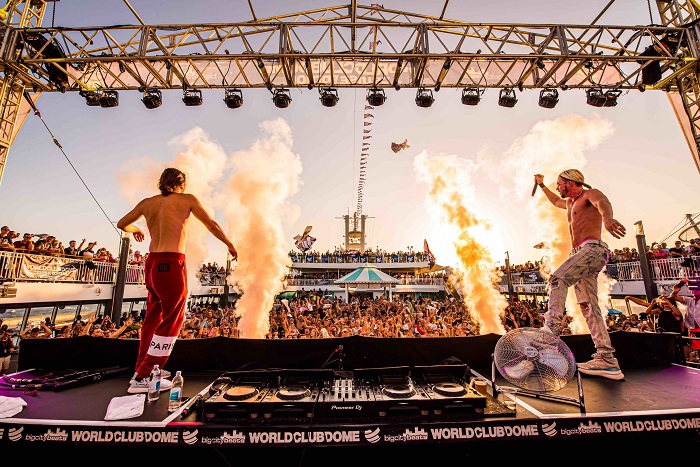 On Monday 12th August 2019, the cruise made its way to Europe’s number one party island: Ibiza. Leaving the picturesque port of Barcelona, the “largest floating club in the world” received its champagne baptism with superstar DJ Robin Schulz, BigCityBeats CEO Bernd Breiter and Le Shuuk. With chart flyer Lost Frequencies playing the sundowner set on the Norwegian Pearl’s open-air deck, and Robin Schulz bringing the night-time soundtrack, the cruise was off to an emphatic start.

The second day was one that would go down in world history, featuring one of the most spectacular experiments in the field of music and science. Establishing a live connection with the International Space Station, the experiment success of the experiment was evident when Luca Parmitano greeted the Norwegian Pearl with a smile on the live-stream. The Italian ESA astronaut and ISS commander, in cooperation with the ESA and other space organisations, were able to broadcast the first sounds from space to earth, starting at 23:00 in a mesmerising 12-minute DJ set.

With an emotional message from over 40,000 metres above the ground, this iconic moment was followed on the Internet and received a truly global media response, as International news channels rapidly picked up the story. Bernd Breiter‘s dream became reality and was covered by the likes of ARD, BBC, CNN, Deutsche Welle, Fox News and Sky, to name a few.

The wonderful collaboration between ESA and BCB interweaved science and entertainment and was perfectly summed up by Emmet Fletcher (Head of Partnerships ESA) when he said, “such a good cooperation with these crazy BigCityBeats guys from Frankfurt” at the press conference on the cruise ship’s upper deck.

Day Three culminated with sets by festival headliners and BigCityBeats family Dimitri Vegas & Like Mike and Australian superstar DJ Timmy Trumpet. While mainstream music was readily available on board, passengers could also experience underground sounds with techno-icon Felix Kröcher, trance pioneers Talla 2XLC and the “Father of the Love Parade” Dr. Motte. After creating the largest floating club hotel in Ibiza for two days, the cruise headed to the South of France: Sète.

With Gestört aber GeiL providing the sunset soundtrack, BigCityBeats resident DJ Le Shuuk in the deep dark night and Sidney Spaeth, Musti Nero and Woody van Eyden in the clubs, the party went on all night long. On Friday, the cruise ended in its home port of Barcelona arriving at 06:00 local time and just like that, the floating BigCityBeats Club Hotel returned to its former self and became a regular cruise ship again. With the five-day party on the Mediterranean coming to a close, BigCityBeats can look back at its most successful edition to-date.

Announcing their return to the Mediterranean Sea, Bernd Breiter has confirmed that the WORLD CLUB DOME Cruise Edition will be back in 2020. With the destinations yet to be announced, fans must wait to hear which dreamlike ports they will set course for, but if you know Bernd Breiter and BigCityBeats, you know it will not be anything but boring! Pre-registration has already started via link.

With plenty more reasons to celebrate before then, the Winter Edtion of WORLD CLUB DOME will take place in Düsseldorf on 10-12th January 2020, the third Zero Gravity event in Spring, the Flagship festival in Frankfurt next June and the world premiere Island Edition in Malta in summer next year are already scheduled for next year. Not to mention, with future cooperation with the ESA, who knows what the creative minds behind BigCityBeats will come up with next, because for them – The Sky Is Not The Limit.

A minute of perfection from the Biggest Club in the World, in a very special edition this week: the Cruise Edition! Feel the Mediterranean vibes from our Barcelona – Ibiza journey! ⠀ ⠀ #wcdcruiseedition #bigcitybeats #worldclubdome #space #esa

Can you feel the atmosphere? Can you feel the beat? Relive our 3rd day of World Club Dome Cruise edition, featuring some serious partying and fiesta in Ibiza! #wcdcruiseedition #worldclubdome #bigcitybeats