BigCityBeats – the groundbreaking brand behind the some of the world’s most extraordinary events – are set to return to Frankfurt’s Commerzbank Arena for the 8th edition of their annual WORLD CLUB DOME event.

Enticing fans with a stellar first wave of acts and an intriguing new theme for 2020, BigCityBeats WORLD CLUB DOME: Las Vegas Edition is set to up the ante once again.

Taking place 5-7th June 2020, ‘The biggest club in the world’ – which saw 180,000 partygoers attend the flagship event last year – will once again play host to some of the biggest names across every genre of club music.

French prodigy DJ Snake and Belgian blinders Dimitri Vegas & Like Mike and US party starter Steve Aoki will take to the decks, with Armin van Buuren leading Dutch contingent Blasterjaxx, Laidback Luke and Quintino, and Germany’s very own Alle Farben are some of the first names promising to raise the roof of the iconic main stage.

Techno titan Sven Väth is set to make his return with his Cocoon Takeover for the now legendary WCD Pool Sessions, Ensuring every musical taste is catered for German rappers Bausa and Sido are some of the first acts to be announced for what will surely be another hip-hop heavy line up next summer. 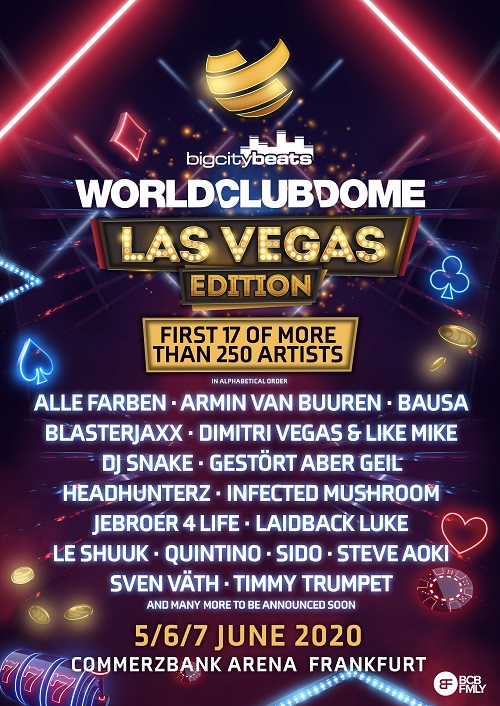 Widely renowned as the entertainment capital of the world, Las Vegas unites the world’s best artists, performers, DJs, sports personalities and chefs in a decadent and luxurious neon landscape where anything is possible and the unimaginable is imagined.

An ethos that directly mirrors that of BigCityBeats CEO Bernd Breiter, who’s trailblazing ideas have seen his brand recognised as one of the leading events company on the planet (and beyond), Sin City is the perfect motif for the master of entertainment.

Keeping their cards close to their chest for the 2020 edition, fans can bet that, as with last year’s aptly named Space Edition, which saw BigCityBeats – in cooperation with the European Space Agency – host the first ever DJ set live from space (hosting a ‘club’ in the ISS) BigCityBeats WORLD CLUB DOME will be going all-in for the Las Vegas Edition.