Techno DJ and producer, Kölsch has unveiled ‘Time / Sleeper Must Awaken’, his second EP in quick succession, out today via Kompakt.

Comprised of two cinematic techno tracks, the EP opens with vocal-led, melodic cut ‘Time‘. A collaboration with striking Brooklyn duo Beacon, the track is teeming with emotion and energy.

Next up, ‘Sleeper Must Awaken‘ is characterized by robotic, trance-indebted synth stabs and an ethereal breakdown in its latter stages. A staple of his recent sets, the track sees Kölsch revert to a more minimalistic approach that’s closer to his ‘classic’ sound.

“There are some artists I like, and there are some I’m obsessed with,” Kölsch explains, as he reflects on the process of creating ‘Time’.

“Beacon sits firmly in the last category. Over the years, I’ve been listening to their albums religiously. They have accompanied me on flights, trains and in cars. It’s been such an honor joining forces in a NY studio, and Time is the result of our effort.”

Discussing ‘Sleeper Must Awaken‘, he continues: “In any art form, the hardest exercise is to reduce. Stripping away layers is similar to throwing away your most prized possessions. The result Is fascinating. Only the essential is left, and the message is clear.”

The EP follows on from January’s ‘Shoulders Of Giants / Glypto‘, a two-track release underpinned by orchestral elements and laden with poignancy. Kölsch has also taken the opportunity to announce a new album, Now Here, No Where.

Released via Kompakt, the album marks his first since completing his acclaimed trilogy 1977, 1983 and 1989, and looks set to push his creative boundaries yet further again.

A master of crafting tracks that appeal to both body and soul, ‘Time / Sleeper Must Awaken‘ is Kölsch at his bold and daring best.

Listen to the EP here 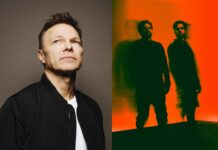 UNTOLD 2022 Recap: Romania’s dance music festival was back and it...

Sébastien Léger remixes Above & Beyond and anamē’s vocal hit –...