Following on from his huge hit, Midnight (The Hanging Tree) released earlier this year, HOSH has taken a fresh spin on Boss Doms’ I Want More Ft. Kyle Peace.

The hugely popular track has already amassed 100,000s of streams as well as support from Billboard and Rolling Stone since its release earlier this month. Storming through with an irresistible remix, HOSH adds his signature of fluttering synths and sturdy baselines to transform the original into a deep house weapon.

With over a decade of experience cementing himself well within the scene, HOSH’s impeccable production skills and performances have taken him on worldwide tours and to have an impressive 2m monthly listeners on Spotify alone.

More recently, his track, Midnight (The Hanging Tree) was Pete Tong’s ‘Essential New Tune’ of the decade before it went on to have endless radio plays and reach #2 in Beatport’s chart. I Want More is the first track from Boss Doms’ new artist project where he has already been making a name for himself as a one-to-watch on the global dance circuit. 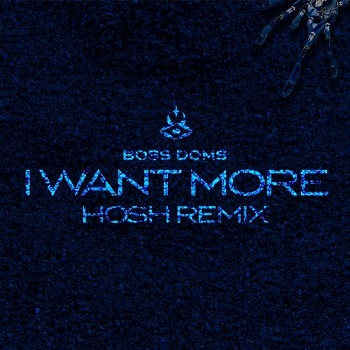 Bringing a punk glam aesthetic to the world of dance, Boss Doms introduced himself to the music world a decade ago. Since then he has built a reputation within the Italian scene with his sell out tours with pop artist, Achille Lauro, production partnerships alongside the country’s biggest acts and not to mention his fashion collaborations with the likes of Gucci, Moschino, Richmond and Fausto Puglisi.

Having already enlisted Kyle Peace, who previously worked with Klangkarussell and released on Ultra and Get Physical, for the original, the I Want More remix pack also includes Havoc & Lawn, Christian Neilsen, Piero Pirupa and Darius Syrossian, who are all lined up to release later this summer.