A two-track release, the seventh edition of Duke‘s iconic ‘For Club Play Only‘ series kicks off with ‘Alter Ego‘, a deep, seductive dance cut featuring the slick vocals of West Coast talent Channel Tres. On the flip side, ‘Let Me Dance‘ is a pumping house jam punctuated by Chicago artist Kid Enigma‘s high-energy flow.

His first release of the new year, it follows a 2020 that saw the release of Duke‘s acclaimed debut album Duality, a diverse LP that delivered a range of sounds, from 90s breakbeat, to cinematic soundscapes, highlighting his breadth and versatility as a producer. A remix package for the album, Duality Remixed, followed later in the year. 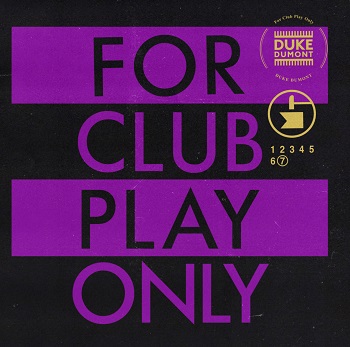 With a back-catalogue that includes international chart no. 1 hits, multi-Grammy nominations and underground house music productions, Duke Dumont‘s ability to defy genres is a testament to his artistry.

Over the past decade he has been honing his skills and immersing himself in the infinite world of possibility that can be accessed through key, rhythm, tone, melody and harmony. Duke Dumont has amassed over 3 billion streams across his portfolio of previous anthems, scoring a number of platinum-selling worldwide #1 singles in the process.