Miami-based Parisian DJ Tchami has released his new video “World to Me” featuring Luke James via his own label Confession. The track is from his highly anticipated forthcoming EP Revelations.

“World To Me” is a story about a young girl who may have come from a more rural town, like most of the youth, became seduced and infatuated with the relentless modernism of a new city and all that it offered, always forward facing, never looking back.She falls in love in the process and together with her partner, they embody the same philosophy of destructive youth.

But over time, the honeymoon period wears off and the lifestyle takes its toll on the young woman. A tiredness and sickness of the monotony of chasing the vacuous creeps in. Her relationship crumbles as her partner falls for another person within the friendship group. The call of the spirits from her past edge into her life, in the form of chrysanthemum petals – a flower in Chinese that symbolises purity.

The final scene is both a literal and a metaphorical ending for the young woman, a state of mind and a physical place. Here she manages to find peace.

The film was shot in the city of Shanghai and a scene on the notable GOUQI ISLAND, an abandoned fishing village known for becoming completely overrun in foliage during the summer months. The village was left untouched from the 80s.

There was a quietness to the village, a spirituality and benevolence that seemed to match the atmosphere that our main character was looking for.

The cast were made up entirely of non actors, real Shanghai youth. Some were real friends, others, acquaintances. 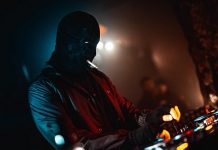